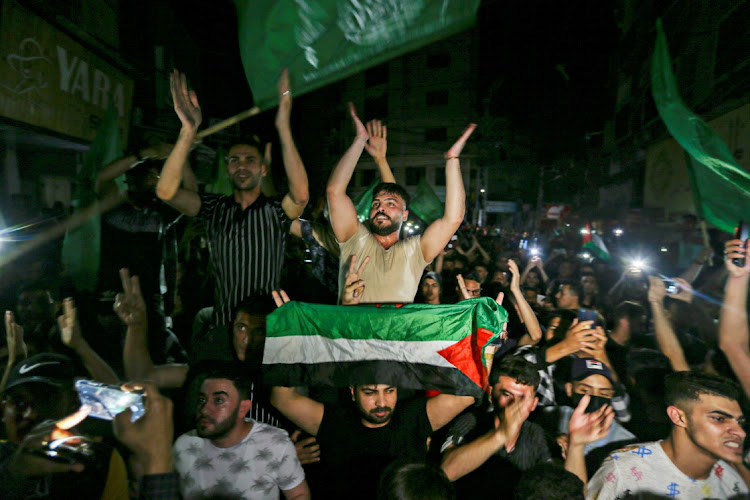 Palestinians celebrate in the streets after a ceasefire, in the southern Gaza Strip on May 21, 2021.
Image: Ibraheem Abu Mustafa

U.S. President Joe Biden on Friday said the Democratic Party still supported Israel and he was praying that the ceasefire between Israelis and Hamas would hold.

Speaking at a White House news conference, Biden said a two-state solution was the only answer to resolving the conflict between the two sides, and pledged to build a major package with other countries to help rebuild Gaza.

Biden, whose administration worked behind the scenes for days to reach a truce, said aid to the region would be coordinated with the Palestinian Authority - Hamas's Western-backed rival in the occupied West Bank - to ensure Hamas was not able to restock its military arsenal.

Israel and Hamas on Friday ended 11 days of fighting that killed 248 people and wounded 1,900. Humanitarian officials say the damage to Gaza will take years to rebuild at a cost of tens of millions of dollars.

Biden called for an end to inter-communal fighting by extremists on both sides, and said it was imperative to ensure security for Palestinians in the West Bank and help the people of Gaza. He said he would also insist that Israeli citizens - both Arabs and Jews - must be treated equally.

He said Palestinians should also recognize the right of Israel to exist.

"Let's get something straight here: until the region says unequivocally they acknowledge the right of Israel to exist as an independent Jewish state, there will be no peace," Biden told reporters at a joint news conference with South Korean President Moon Jae-in.

Biden declined to discuss his recent discussions with Israeli Prime Minister Benjamin Netanyahu, but said he believed the Israeli leader would maintain the ceasefire.

"I'm praying this ceasefire will hold. I take Bibi Netanyahu - when he gives me his word - I take him at his word. He's never broken his word to me," Biden said.

A senior Hamas official predicted a ceasefire within days in the Israel-Gaza conflict, after US President Joe Biden urged Israeli Prime Minister ...
News
6 months ago

Israel bombarded Gaza with air strikes and Palestinian militants kept up cross-border rocket fire on Wednesday, with no firm sign of any imminent ...
News
6 months ago
Next Article