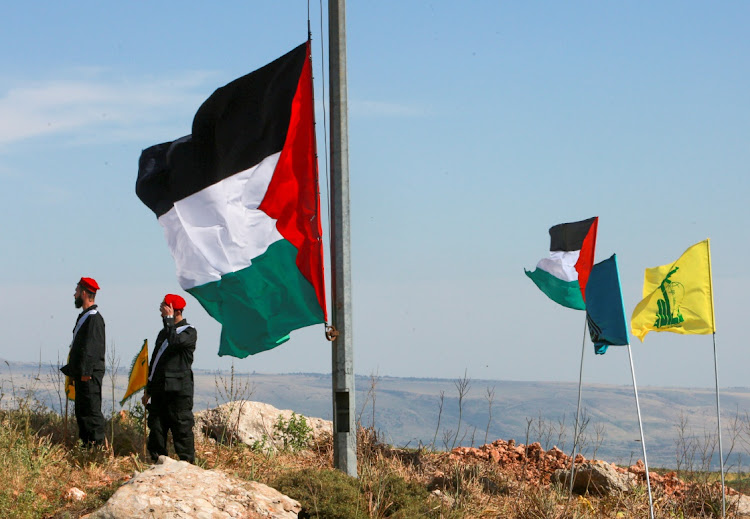 Hezbollah members stand near Palestinian and Hezbollah flags during a ceremony marking the annual Quds Day, or Jerusalem Day, in the southern Lebanese village of Khiam, near the border with Israel, Lebanon May 7, 2021.
Image: AZIZ TAHER

A Lebanese man was shot and killed by Israeli troops after he and others protesting in support of Palestinians tried to cross a security fence on the border with Israel, Lebanon's state news agency NNA reported.

NNA said another youth had been wounded after protesters gathered along the border in a show of solidarity with Palestinians as the conflict between Israel and the Islamist group Hamas in Gaza intensified.

Earlier, the Israeli military said a number of people in Lebanon had damaged the border fence and set fire to a field. They retreated after Israeli tanks fired warning shots.

The Lebanese protesters had gathered close to the border fence, waving flags, including the Palestinian national flag and the flag of Lebanon's Iran-backed Hezbollah movement, a staunch opponent of Israel.

Lebanese President Michel Aoun said in a statement he "strongly condemned the crime committed by Israeli forces". The dead man was named as Mohamed Tahan, aged 21.

The protesters were later dispersed by the Lebanese army in the presence of UNIFIL, the U.N. peacekeeping force in Lebanon that monitors the boundary with Israel, a witness said.

Countries and international organisations are sending help to Lebanon after a massive explosion in Beirut killed at least 158 people and injured ...
News
2 years ago
Next Article