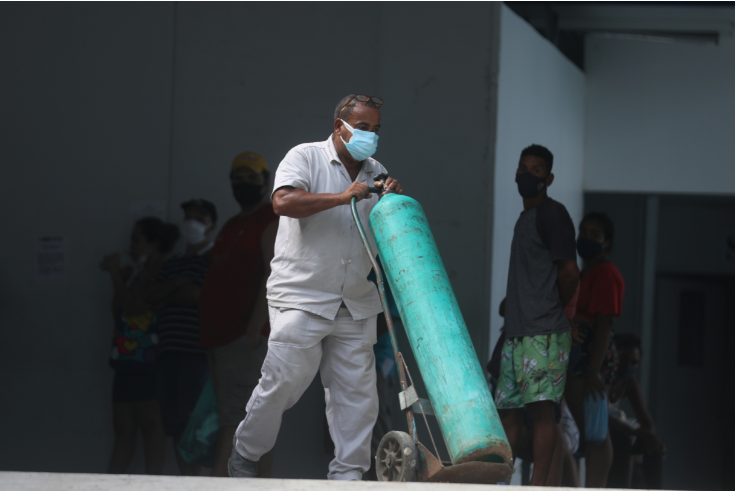 On Sunday, Nepal reported a daily increase of 8,777 infections, 30 times the number recorded on April 9. The total caseload stands at 394,667 and 3,720 deaths, according to government data.
Image: REUTERS/Pilar Olivares

Nepal is so short of oxygen canisters that it has asked climbers on Mount Everest to bring back their empties instead of abandoning them on mountain slopes, an official said on Monday, as it struggles with a second wave of the coronavirus.

The country issued climbing permits to more than 700 climbers for 16 Himalayan peaks - 408 to Mount Everest - for the April-May climbing season in a bid to get the mountaineering industry and tourism back up and running.

The Nepal Mountaineering Association has asked the climbers to help Nepal deal with a surge in Covid-10 cases that has brought the country's fragile healthcare system to breaking point, as it has in neighbouring India where deaths held close to record highs on Monday.

Kul Bahadur Gurung, a senior official with the NMA, said climbers and their Sherpa guides were estimated to have carried at least 3,500 oxygen bottles this season. These bottles often get buried in avalanches or are abandoned on the mountain slopes at the end of the expedition.

"We appeal to climbers and sherpas to bring back their empty bottles wherever possible as they can be refilled and used for the treatment of the coronavirus patients who are in dire needs," Gurung told Reuters.

Calls grew for India to impose a nationwide lockdown as new coronavirus cases and deaths held close to record highs on Monday, increasing pressure on ...
News
6 months ago

On Sunday, Nepal reported a daily increase of 8,777 infections, 30 times the number recorded on April 9. The total caseload stands at 394,667 and 3,720 deaths, according to government data.

Many private and community hospitals in Kathmandu have said they are unable to take any more patients due to lack of oxygen. There was a shortage of both the gas and canisters.

"We need about 25,000 oxygen cylinders immediately to save people from dying. This is our urgent need," Samir Kumar Adhikari, a health ministry official said.

"We also need oxygen plants, compressors and ICU beds urgently," Adhikari said. Nepal has asked China to send 20,000 cylinders, some of which will be airlifted to meet urgent needs, another official said.

Nepal has only 1,600 intensive care beds and fewer than 600 ventilators for its population of 30 million with just 0.7 doctors per 100,000 people, according to ActionAid Nepal.

Prakash Thapa, a doctor at the Bheri hospital in Nepalgunj, in southwest Nepal bordering India, said patients were sleeping on the floor and corridors.

"We are somehow managing so far but it will be difficult to take any more patients,” he said.