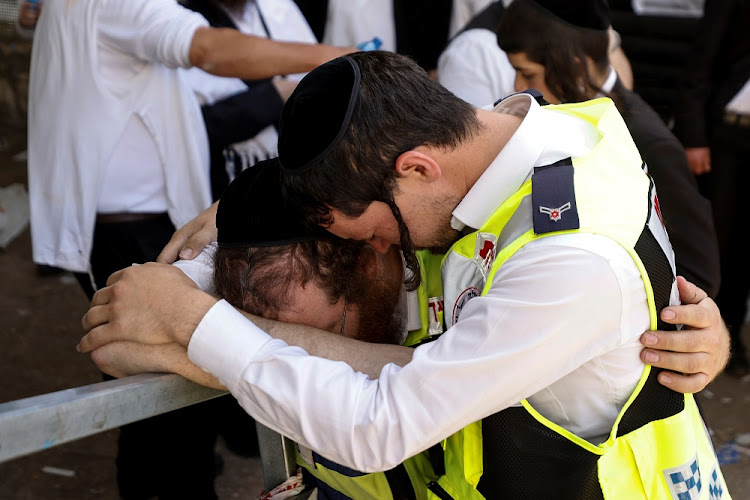 Emergency workers react upon revisiting the site where dozens were crushed to death in a stampede at a religious festival, as the country observes a day of mourning, at Mount Meron, Israel May 2, 2021.
Image: REUTERS/Amir Cohen

Israel observed a day of mourning on Sunday for 45 people crushed to death at a Jewish religious festival, with flags lowered to half-staff and questions raised about accountability for one of the country's worst civilian disasters.

In accordance with Jewish tradition, funerals were held with as little delay as possible. More than 20 of the victims of Friday's disaster on Mount Meron were buried overnight after official identification was completed.

Witnesses described a stampede and a pyramid of bodies, including several children, in a slippery metal-floored passageway at the annual pilgrimage of ultra-Orthodox faithful to the tomb of a second-century Jewish mystic, Rabbi Shimon Bar Yochai, in northern Israel.

"We're all heartbroken, saddened, shattered into a million pieces. There are no words to describe the feeling of the entire country," Rabbi Velvel Brevda, 66, said on Sunday on Mount Meron, where prayer vigils were being held.

Israeli media estimated that some 100,000 people attended the event on Friday, numbers that underscored a relaxing of coronavirus restrictions in a country that had sped ahead of others in its vaccination rollout.

Questions were being raised as to whether the government and police had been reluctant to limit the crowd size at the site - labelled hazardous years ago by state inspectors - so as not to anger influential ultra-Orthodox rabbis and politicians.

"A thorough inquiry is required," Culture Minister Hili Tropper told Kan public radio. "This terrible disaster will help everyone understand ... that there should be no place where the state does not set the rules."

An international rights watchdog accused Israel on Tuesday of pursuing policies of apartheid and persecution against Palestinians - and against its ...
News
1 year ago

The Justice Ministry said investigators would look into whether there had been any police misconduct. But police commissioner Yaakov Shabtai, in a message to the police force, said that police should not be singled out.

"We are working to discover the truth and produce educated and balanced lessons for all organisations involved in this complex event," he said.

In his noon address in St Peter's Square in the Vatican, Pope Francis said he would remember the victims and their families in prayer.

"With sadness, I express my closeness to the people of Israel for the incident last Friday on Mount Meron that caused the death of 45 people and numerous injuries," Francis said.

Prime Minister Benjamin Netanyahu promised an investigation. His presidential mandate to form a new government, after an inconclusive March 23 election, expires on Wednesday, but public calls to determine responsibility for the tragedy seemed certain to hound any incoming administration.

An official list of fatalities showed that five of the dead were visiting U.S. nationals. Two Canadians, a British citizen and an Argentinian were also killed.

Avigdor Chayut, who was injured in the crush, buried his 13-year-old son Yedidya overnight in a cemetery in Bnei Brak, a largely religious town near Tel Aviv.

He told Kan public radio he and Yedidya had become separated in the passageway. But a younger son, Shmuel, was at the father's side as people fell on top of them. Shmuel survived with a sprained limb.

"Dad, I am about to die. Let's say 'Shema Yisrael' (Hear, O Israel: the Lord our God, the Lord is one)," he heard 10-year-old Shmuel say - a prayer traditionally spoken by Jews facing imminent death.