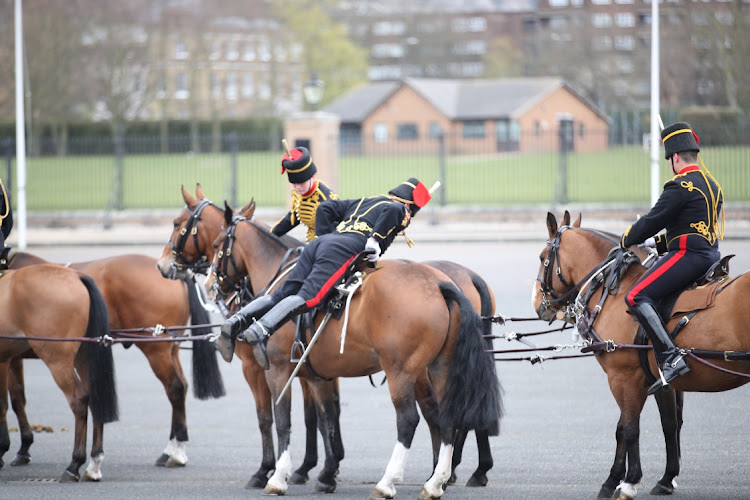 Gun salutes were fired across Britain on Saturday to mark the death of Prince Philip as tributes flooded in for a man who was a pillar of strength for Queen Elizabeth during her record-breaking reign.

Members of the public laid flowers outside royal residences, paying their respects to the 99-year-old prince who spent more than seven decades at his wife's side.

On its official Twitter feed, the royal family put up a tribute paid by the queen to her husband on their 50th wedding anniversary in 1997.

"He has, quite simply, been my strength and stay all these years, and I, and his whole family, and this and many other countries, owe him a debt greater than he would ever claim, or we shall ever know," she said.

Members of the family have been visiting the grieving monarch at Windsor Castle where Philip died on Friday.

"The queen has been amazing," said a tearful Sophie, the Countess of Wessex, as she left with her husband Prince Edward, the youngest son of Elizabeth and Philip.

The armed forces marked Philip's passing at noon (1100 GMT) with a Death Gun Salute. Artillery units in London, Edinburgh, Cardiff, Belfast and Gibraltar, and some navy warships, fired their guns.

Buckingham Palace is expected to announce details of the funeral later on Saturday.

It is likely to be a small, private affair, stripped of the grandeur of traditional royal occasions by Covid-19 restrictions and by the prince's own dislike of people making a fuss.

Despite a request from the royal family for the public to obey pandemic social distancing rules and avoid visits to its residences, people laid cards and bouquets outside Windsor Castle and Buckingham Palace.

"It's not something I've ever done before," said Joanna Reesby, 60, who came to pay her respects at Buckingham Palace. "I brought yellow roses for friendship because I think that's what he exhibited to everyone who came into his world."

The queen, 94, announced the death of "her beloved husband", and she has lost her closest confidante, the one person she could trust and who was free to speak his mind to her. They had been married for 73 years and he would have turned 100 in June.

Messages of condolence have poured in from world leaders.

The Duke of Edinburgh, as Philip was officially known, was credited with helping to modernise the institution and supporting his wife as the monarchy faced repeated crises during her reign, which has lasted 69 years so far.

The tenor bell at London's Westminster Abbey tolled 99 times, a traditional marking of the death of a royal family member.

Flags at Buckingham Palace and at government buildings across Britain were lowered to half-mast and billboard operators replaced adverts with a photo and tribute to the prince.

The BBC aired a special programme with interviews with the queen and Philip's children, including heir-to-the-throne Prince Charles.

Philip "probably wanted to be remembered as an individual in his own right", said Charles.

"He didn't suffer fools gladly, so if you said anything that was in any way ambiguous, he would say: 'Make up your mind!' Perhaps it made one choose one's words carefully," Charles said.

A Greek prince, Philip married Elizabeth in 1947 and broke the news of her father's death five years later while they were in Kenya, meaning that she was queen at the age of 25.

He went on to play a key role helping the monarchy adapt to a changing world in the post-World War Two period, finally stepping back from public duties in 2017.

"I think he'll be remembered as a moderniser in many ways, as someone who both inside the palace and outside the palace was a force for change," Simon Lewis, the queen’s communications secretary from 1998 to 2001, told Reuters.

He said Philip's loss would be a terrible blow to the queen.

"I think they were the most extraordinary partnership and that's going to be a huge, huge, gap," Lewis said. "I think he always saw himself partly as the eyes and the ears of the queen - that's gone forever."