India reports most number of cases globally in past two weeks 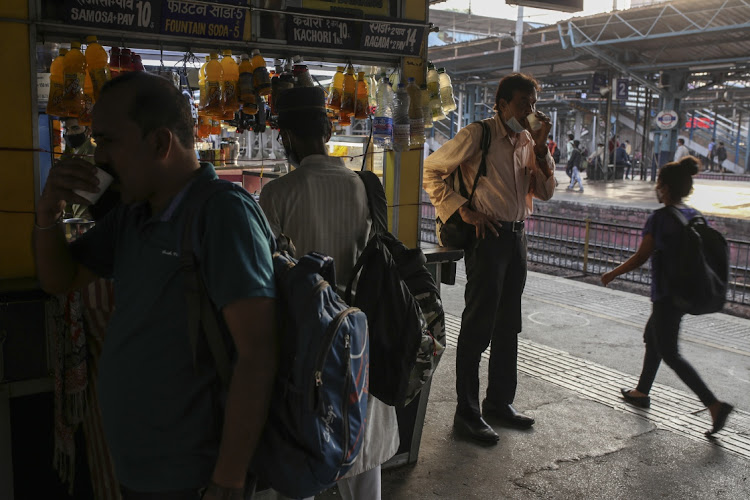 People drink tea at the Dadar railway station during a lockdown in Mumbai, India, on Saturday, April 10, 2021. Maharashtra has halted all non-essential services, ordered private companies to work from home, and shut malls and restaurants through April.
Image: DHIRAJ SINGH

India's daily coronavirus cases on Saturday rose by a record for the fifth time this week and deaths surged to the highest in more than five months, with hospitals and crematoriums overflowing in parts of the country.

New cases in the world's second-most populous country have totalled the most of anywhere in the world over the last two weeks. India's overall tally of 13.21 million is the third-highest globally, just shy of Brazil and below the worst affected country, the United States.

The second surge in infections, which has spread much more rapidly than the first one that peaked in September, has forced many states to impose fresh curbs but Prime Minister Narendra Modi has refused to impose a national lockdown given the high economic costs.

Authorities in Maharashtra, the Indian state with the highest cases, have ordered a weekend lockdown that will end early on Monday. Mega cities such as Mumbai, the country's financial centre and Maharashtra's capital, and the national capital of New Delhi have also imposed nightly curfews until the end of April.

Despite that, Prime Minister Modi again addressed an election rally crowded with thousands of people, many without masks, in the eastern state of West Bengal.

The government has blamed the resurgence mainly on crowding and a reluctance to wear masks as businesses across the country have reopened since February, only to be partially shut again to control the current surge.

"Mass gatherings for elections and religious events have accelerated Covid, for which all of us are responsible to some extent," Sonia Gandhi, the chief of the main opposition Congress party, said in a statement.

In Mumbai, hundreds of poor migrant workers crammed onto trains this week to flee, potentially risking a wider outbreak in smaller towns and villages.

The railways department called it a usual rush this time of year for people to harvest crops back home and celebrate festivals.

Coronavirus-related deaths worldwide crossed 3 million on Tuesday, according to a Reuters tally, as the latest global resurgence of Covid-19 ...
News
1 year ago

Many states have complained of a vaccine shortage though immunisations are currently restricted to only about 400 million of India's 1.35 billion people.

The health minister said on Thursday the government had more than 43 million doses in stock or in the pipeline, which may be enough for only about 10 days going by the immunisation trend.

India, the world's biggest maker of vaccines, has so far administered 97.5 million doses, using the AstraZeneca shot and another developed at home by Bharat Biotech.

Arvinder Singh Soin, a surgeon and leading liver transplant specialist, is one of many top Indian medical authorities that have criticized the government for its slow approach to approving other vaccines by insisting on the need for local trials for shots formulated abroad.

"We need to immediately facilitate the approval of the next lot of vaccines," Soin said on Twitter. "Insistence on bridging trials data not relevant anymore given the situation. Millions have had these all over the world."

The country breached the 100,000 mark for the first time on Monday. Only the United States has reported more cases in a day since the pandemic began over a year ago.

India's total deaths have now swelled to 168,436, health ministry data showed, though it has one of the lowest fatality rates, partly attributed to its relatively younger population.

Still, crematoriums have been overwhelmed in some Indian cities.

In Surat in the western state of Gujarat, officials were seeking additional crematorium workers to handle the overflow. It has dropped a plan to rope in teachers after online criticism.

In the northern city of Lucknow, distraught relatives had to wait for hours to perform the last rites of their family members in the area's only electric crematorium, said its officer-in-charge Mohammad Wasimuddin.

In Hinduism, the religion for the majority of Indians, cremation is the traditional method for dealing with the physical body after death.

The Serum Institute of India has fully refunded SA for 500,000 doses of the AstraZeneca Covid-19 vaccine which had not yet been delivered, health ...
News
1 year ago

India batting great Sachin Tendulkar said on Friday he has been admitted to hospital as a precautionary measure after contracting the novel ...
Sport
1 year ago

Cricket Australia boss Nick Hockley has dismissed speculation that India is weighing a boycott of the fourth test in Brisbane over the need to ...
Sport
1 year ago
Next Article