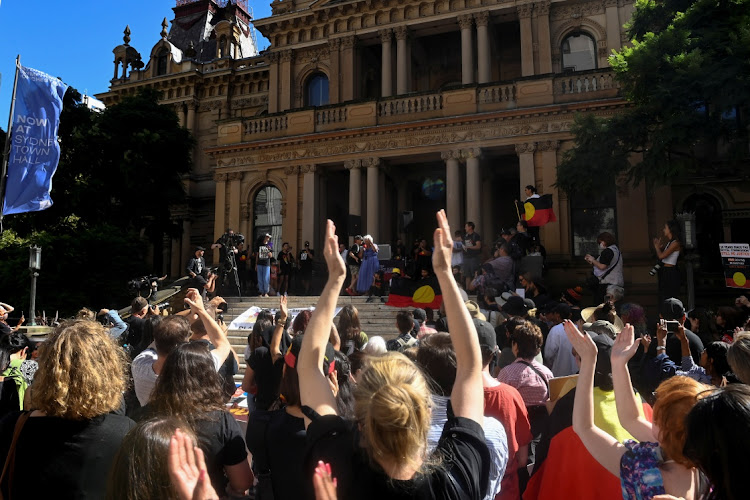 Protesters listen to Aunty Shirley, an Indigenous Australian, addressing the crowd in a rally to mark a national day of action, protesting against Aboriginal deaths in police custody, in Sydney, Australia on April 10, 2021.
Image: REUTERS/Jaimi Joy

Hundreds of people demonstrated in Australia's major cities on Saturday to protest the deaths of Indigenous people in custody, ahead of the 30th anniversary of a major report into the issue.

More than 470 Aboriginal people have died in custody in those three decades, including at least five since last month, local media reported. "Almost 30 years and 441 deaths since the Royal Commission, no police officer or authority has been convicted for Black deaths in custody," said NATSILS, a legal services group for Aboriginal and Torres Strait Islander people.

"Our people continue to die at horrific rates. There is no accountability, and no justice," it said in a statement. "We call on the Prime Minister to meet us face to face on the 30-year anniversary to hear our stories, to see our pain, but most of all we want answers."

Protests and marches took place in cities including Sydney, Brisbane, Melbourne, and the capital Canberra ahead of Thursday's anniversary of the report by a royal commission on Black deaths in custody.

Interim WBA light middleweight champion Anthony Mundine has been accused of racism after making disparaging remarks about the heritage of his ...
Sport
9 years ago

A rich Australian state's plan to pay up to Aus$2,000 (US$2,106) to Aboriginal people whose wages were kept from them for decades has been criticised ...
News
10 years ago

Undertaken from 1987 to 1991, it found that Aboriginal and non-Aboriginal people in custody died at about the same rate but that Indigenous people were incarcerated at a much higher rate.

Indigenous people account for around 2% of Australia's population but around 27% of the national prison population.

The commission made 339 recommendations, of which few have been implemented.

"Really hope we’ll see the same outpouring of grief and remembrance for the 474 Aboriginal and Torres Strait Islander people whose deaths we mourn today on the 30 year anniversary of the Royal Commision into deaths in custody, as that of a 99 year old member of the colonising British Monarchy," said activist Sally Rugg on Twitter.

Australia has no treaty with its Indigenous people. British settlement of the then-colony was based on the legal concept that land could be acquired by settlement.