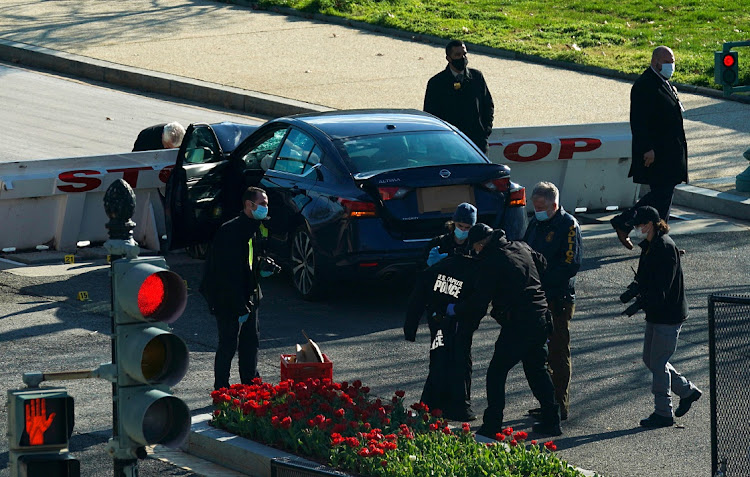 Law enforcement officers hold up a U.S. Capitol Police jacket at the site after a car rammed a police barricade outside the U.S. Capitol building on Capitol Hill in Washington on April 2, 2021.
Image: ERIN SCOTT

A motorist rammed a car into U.S. Capitol police on Friday and brandished a knife, killing one officer and injuring another and forcing the Capitol complex to lock down in an attack that police said did not appear to be terrorism-related.

Police shot and killed the suspect.

Yogananda Pittman, acting chief of the U.S. Capitol Police, said the suspect drove into the officers, then hit a barricade and got out of the vehicle, lunging at them with a knife.

"It is with a very, very heavy heart that I announce one of our officers has succumbed to his injuries," she told a news conference, her voice choked with emotion.

Police identified the slain officer as William "Billy" Evans, an 18-year veteran of the force and father of two children. Officials said the other officer was in a stable and non-life threatening condition.

"It does not appear to be terrorism-related but obviously we'll continue to investigate," said Robert Contee, acting chief of the Metropolitan Police Department of Washington.

President Joe Biden said he was heartbroken by the attack and ordered flags at the White House be lowered to half-staff. In a statement, he said he was being briefed on the investigation.

Former US President Donald Trump, suspended from Twitter, Facebook and other social media sites after the Jan. 6 attack on the Capitol, plans to ...
News
1 year ago

Multiple media organizations, citing anonymous sources, named the suspect as Noah Green, 25, of Newport News, Virginia. Green's brother told the Washington Post that his sibling struggled with drug use and paranoia and his family worried about his mental state.

According to media reports, Green spoke on Facebook about the "end times", the anti-Christ, and government "mind control". He also said he was unemployed after leaving his job, "partly due to afflictions," and praised Nation of Islam leader Louis Farrakhan.

Brendan Green told the Washington Post his brother had been violently ill on Thursday evening at the Virginia apartment they shared, and later sent him a text message saying that he planned to become homeless.

Police said the suspect was not known to them, and they had yet to determine what motivated him.

"Clearly this was someone who was actively trying to just get at whoever or whatever - we just don't know right now," Contee said. "Whether the attack was at law enforcement, or whoever, we have a responsibility to get to the bottom of it and we'll do that."

Dozens of police cars, marked and unmarked, raced toward the iconic domed white building, in an unwelcome reminder of Jan. 6, when thousands of supporters of then-President Donald Trump overran the complex.

It was the worst security threat at the Capitol since that day, when scores of Capitol police were wounded, one was killed and two others later committed suicide.

U.S. spy agencies warned in mid-March of an ongoing threat that racially motivated violent extremists, such as white supremacists, will carry out mass-casualty attacks on civilians while militia groups target police and government personnel and buildings.

Roads leading to the complex were blocked by police cars or officers and people inside the Capitol were told to stay away from windows for much of the afternoon before police announced that the lockdown had been lifted.

Videos and photographs from the scene showed a blue car rammed into a security barricade, a front door open.

Hundreds of demonstrators gathered outside the Georgia State Capitol in Atlanta on Saturday in support of the Asian American community after a ...
News
1 year ago

There were few people at the Capitol. Members of Congress were not in Washington on Friday, with both the Senate and House of Representatives in recess for the Easter holiday.

Dozens of National Guard troops, who have been stationed at the Capitol since the January attack, quickly deployed. Heavily armed and in riot gear, they jogged in columns to stand in rows at the scene and around the complex.

Authorities have begun only in the past couple of weeks to remove the outer ring of high, razor-wire-topped fencing erected around the sprawling Capitol complex after the Jan. 6 rampage. Many of the thousands of National Guard troops posted at the building in January had also been sent home.

Lawmakers have been arguing about how much security should remain on Capitol Hill, which is a popular park for city residents as well as the seat of government. Members of Congress from both political parties have introduced legislation to make it illegal to erect permanent fencing around the building.

The Jan. 6 assault took place while the House of Representatives and Senate, with the Senate presided over by then-Vice President Mike Pence, was certifying Biden's November election victory over the Republican Trump.

At the time Trump's supporters shouted slogans including "Stop the Steal" and "Hang Mike Pence" as they attacked the Capitol and said they hoped to stop the election certification.

Lawmakers found a rare moment of consensus when the U.S. Senate voted on Friday to award the highest honor Congress can bestow to one of the police ...
News
1 year ago

U.S. President Joe Biden made a late-night visit to Capitol Hill on Tuesday to pay his respects to Brian Sicknick, the Capitol police officer killed ...
News
1 year ago

Alexandria Ocasio-Cortez described being terrified for her life during the storming of the U.S. Capitol in an emotional broadcast on Monday night.
News
1 year ago
Next Article