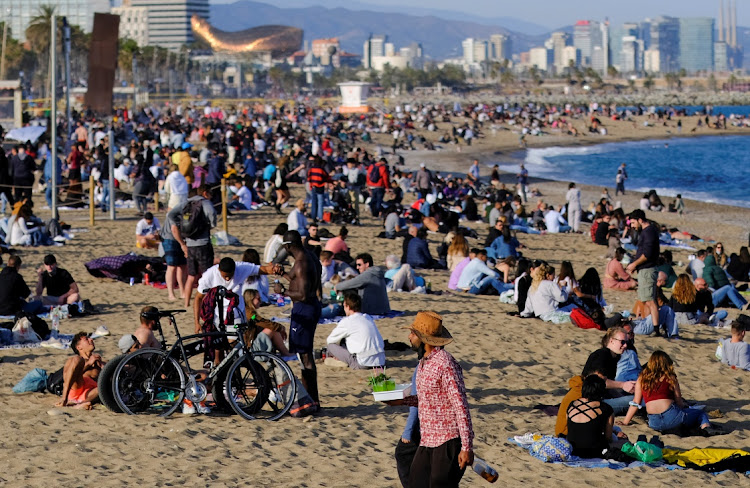 Dozens of partygoers danced on Friday on a popular beach near central Barcelona, some without wearing masks or observing social distancing in defiance of Covid-19 restrictions, police said on Saturday.

The impromptu party took place on Barceloneta beach and police said they had advised revellers they were breaking health regulations.

"Barcelona is the perfect place to party, to drink, but this is a big problem - the police - they are stopping people enjoying themselves," a British reveller who gave only his first name Liam, 32, and who was wearing a mask, told Reuters.

Meetings of more than six people in public areas are banned in Spain's northeastern region of Catalonia and offenders can face fines of 300 to 600 euros ($350 to $700), police said.

"Our officers advise people where there are big groups of people that they are contravening restrictions and sometimes if they do not put on masks or move away, they can face fines," said a spokesman for Catalan regional police. He did not say if anyone had been fined in this instance.

Miquel Samper, Catalan regional interior minister, told RAC1 radio on Saturday people should wear masks if they are mixing with others on the beach, but did not need to do so if they are sunbathing or swimming in the sea - guidance which differs from national law.

Catalonia is one of several Spanish regions to defy a law brought in on Wednesday that requires people to wear masks outdoors regardless of whether the 1.5 metre safety distance is being observed.

After mounting criticism, the Spanish government has said the mask law would be revised, but has not said when any revision would take place.

MADRID - Spanish health services have already administered all the doses from a batch of AstraZeneca's COVID-19 vaccine that some countries suspect ...
News
2 months ago

'The best job in the world': a Madrid ambulance doctor's dedication after a year of Covid

The number of Spanish children treated for poisoning after ingesting hand-sanitising gels has rocketed as the product has become ubiquitous during ...
News
6 months ago
Next Article