At least 114 reported killed by security forces on Saturday 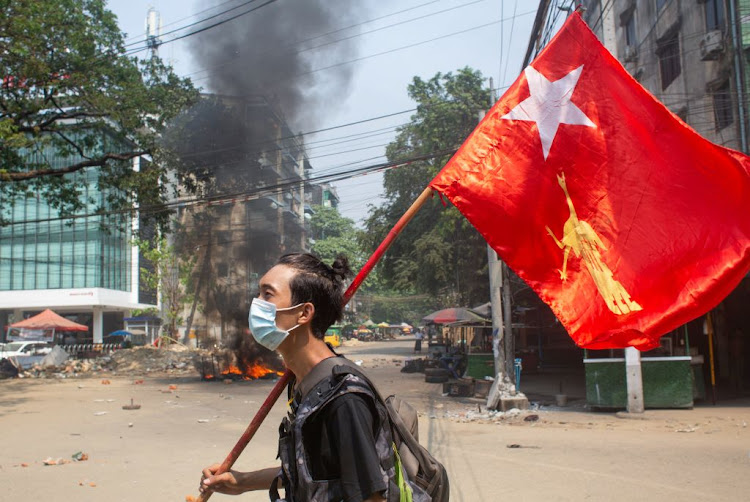 A man holds a National League for Democracy (NLD) flag during a protest against the military coup, in Yangon, Myanmar, on March 27 2021.
Image: REUTERS/Stringer

Across Myanmar, opponents of the ruling junta on Sunday mourned the killings of at least 114 people by security forces in the bloodiest day since the military coup on February 1, but vowed to keep protesting to end army rule.

Children were among those killed on Saturday, Myanmar's Armed Forces Day, according to news reports and witnesses, in a crackdown that drew renewed Western criticism. The UN investigator said the army was carrying out “mass murder”.

“We salute our heroes who sacrificed lives during this revolution and We Must Win This REVOLUTION,” one of the main protest groups, the General Strike Committee of Nationalities (GSCN), posted on Facebook.

Saturday also brought some of the heaviest fighting since the coup between the army and the ethnic armed groups that control swathes of the country.

Military jets had killed at least three people in a raid on a village controlled by an armed group from the Karen minority, a civil society group said on Sunday, after the Karen National Union faction earlier said it had overrun an army post near the Thai border, killing 10 people. The air strikes sent villagers fleeing into the jungle.

A junta spokesperson did not answer calls seeking comment on the killings or the fighting.

Senior General Min Aung Hlaing, the junta leader, had said during a parade to mark Armed Forces Day that the military would protect the people and strive for democracy.

The Myanmar Now news portal said 114 people were killed across the country in crackdowns on the protests.

Myanmar's ethnic armed factions will not stand by and do nothing if the military junta's forces continue to kill protesters, the leader of one of the ...
News
8 months ago

The dead included 40 people, one of them a 13-year-old girl, in Myanmar's second city of Mandalay. At least 27 people were killed in the commercial hub Yangon, Myanmar Now said. Another 13-year-old was among the dead in the central Sagaing region.

Deaths were recorded from the Kachin region in the mountainous north to Taninthartharyi in the far south on the Andaman Sea — taking the overall number of civilians reported killed since the coup to more than 440.

'THIS BLOODSHED IS HORRIFYING'

US ambassador Thomas Vajda said on social media: “This bloodshed is horrifying,” adding “Myanmar's people have spoken clearly: they do not want to live under military rule”.

The EU delegation to Myanmar said Saturday would “forever stay engraved as a day of terror and dishonour.”

The top military officer from the US and nearly a dozen of his counterparts joined to condemn the killings by Myanmar's army.

Their statement said that a professional military must follow international standards for conduct “and is responsible for protecting — not harming — the people it serves.”

UN special rapporteur Tom Andrews said it was time for the world to take action — if not through the UN Security Council then through an international emergency summit. He said the junta should be cut off from funding, such as oil and gas revenues, and from access to weapons.

“Words of condemnation or concern are frankly ringing hollow to the people of Myanmar while the military junta commits mass murder against them,” he said in a statement.

“The people of Myanmar need the world’s support. Words are not enough. It is past time for robust, co-ordinated action.”

Despite the Western condemnation, Myanmar's junta has friends elsewhere.

Diplomats said eight countries — Russia, China, India, Pakistan, Bangladesh, Vietnam, Laos and Thailand — sent representatives, but Russia was the only one to send a minister to the parade on Armed Forces Day, which commemorates the start of the resistance to Japanese occupation in 1945.

Support from Russia and China, which has also refrained from criticism, is important for the junta as those two countries are permanent members of the United Nations Security Council and can block potential UN actions.

The military has said it took power because November elections won by Aung San Suu Kyi's party were fraudulent, an assertion dismissed by the country's election commission. Suu Kyi remains in detention at an undisclosed location and many other figures in her party are also in custody.

Myanmar's embassy in London, which is under the control of junta opponents, said on Facebook that the ambassador met Suu Kyi's son there on Thursday. Kim Aris had asked if the embassy could arrange a call with his mother, it said.

“Kim asked about his mother's situation, and her health. He is obviously extremely worried,” it said, adding that the ambassador had already sent three requests to Myanmar's capital and would send another reminder.