Merkel to discuss speeding up rollout with state leaders 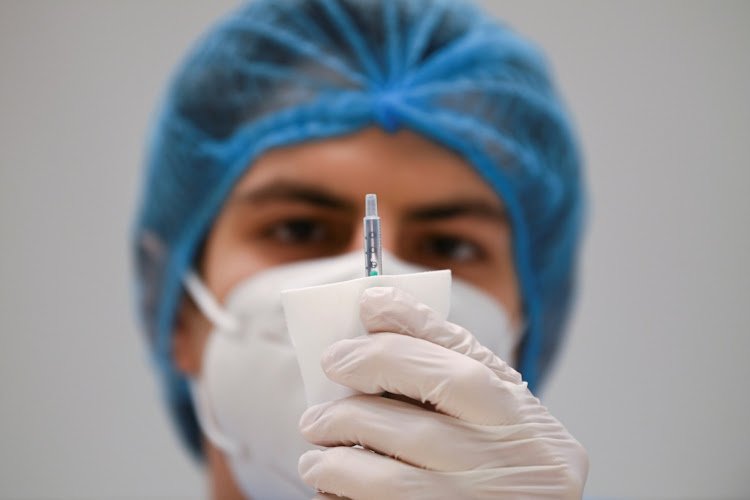 A medical technician assistant holds a syringe with the AstraZeneca COVID-19 vaccine that will be used to vaccinate Winfried Kretschmann, Baden-Wuerttemberg federal Prime Minister of the The Greens party amid the coronavirus pandemic in Stuttgart, Germany, March 19, 2021.
Image: Marijan Murad/Reuters

Germany's health minister warned on Friday there was not enough vaccine in Europe to contain the COVID-19 third wave, as the country sought to get its rollout back on track following a three-day pause in using the AstraZeneca shot.

Case numbers have been rising in Germany, driven by an easing of restrictions in recent weeks just as a more transmissible variant of the virus has spread, underlining the need to accelerate vaccinations to protect the vulnerable.

Health Minister Jens Spahn defended the suspension, which was lifted on Thursday after European Union regulators said the benefits outweighed the risk, as providing transparency.

"We can reintroduce AstraZeneca but prudently with informed doctors and appropriately educated citizens," he said in a weekly news conference.

But he warned that vaccinations alone would not be able to contain the third wave as there are not enough doses, and said restrictions that were lifted may have to be reimposed to contain the spread of the virus.

"The rising case numbers may mean that we cannot take further opening steps in the weeks to come. On the contrary, we may even have to take steps backwards," Spahn said.

State leaders are also due to discuss with Chancellor Angela Merkel later on Friday ways to speed up the vaccination campaign, among other by allowing family doctors to start administering doses at their surgeries.

The suspension was the latest hurdle in Germany's vaccination campaign, which has been plagued by delivery delays and news reports of side-effects. As of Friday, just 8.5% of the population had received a first shot, far behind other countries like the United States and Britain.

German state leaders said they were ready to quickly catch up on lost time. In Berlin, anyone who was due to receive an AstraZeneca shot earlier in the week can turn up at vaccination centres this weekend without an appointment.

SA will face the anticipated third wave of the Covid-19 pandemic and go through the winter season without having achieved herd immunity.
News
1 month ago

Meanwhile, the premier of the southwestern German state of Baden-Wuerttemberg, Winfried Kretschmann, 72, is due to receive an AstraZeneca vaccination on Friday, in a move to shore up confidence.

But Bodo Ramelow, the premier of Thuringia in eastern Germany, said he would not advise his wife, who needs to use blood thinners due to a risk of thrombosis, to get the AstraZeneca shot although he would do so himself.

Karl Lauterbach, the main health expert of the SPD, Merkel's junior coalition partner, said it was important to not create the impression that the AstraZeneca vaccine was not suitable for younger women.

In Germany, eight people were diagnosed with cerebral venous sinus thrombosis (CVST) within about two weeks of being vaccinated. They were among the 1.6 million recipients of the shot as of Wednesday, with CVST cases higher among women.

Lauterbach said the higher incidence could be due to the fact that younger women work in the health sector or in kindergartens, groups that have received the AstraZeneca vaccine in higher numbers.

Spahn said he hoped vaccinations could take place in doctors' practices from April 19 at the latest, but warned that supply would remain restricted.

Germany expects to receive 15 million doses of the AstraZeneca vaccine in the second quarter, a few million fewer than initially expected, he said.

Spahn also spoke out in favour of signing a supply deal for the Russian Sputnik V vaccine for COVID-19, but said there needed to be greater clarity on the quantities available.

Minister Zweli Mkhize said the fact that the country was on alert level 1 did not mean that South Africans should let their guards down.
News
1 month ago

SA will face the anticipated third wave of the Covid-19 pandemic and go through the winter season without having achieved herd immunity.
News
1 month ago
Next Article