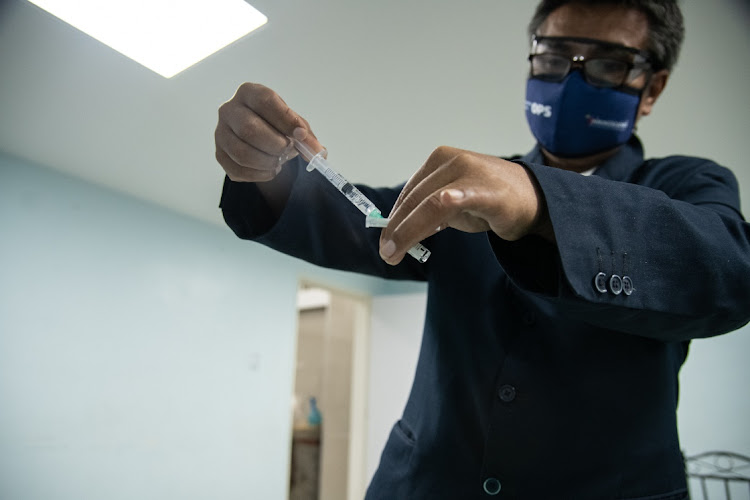 A healthcare worker prepares a dose of the Russian Sputnik V Covid-19 vaccine at a Comprehensive Diagnostic Center in the Mariperez neighborhood of Caracas, Venezuela, on Thursday, Feb. 25, 2021.
Image: Carolina Cabral Fernandez

A Russian trial testing the effectiveness of revaccination with the Sputnik V shot to protect against new mutations of the coronavirus is producing strong results, researchers said on Saturday.

Last month President Vladimir Putin ordered a review by March 15 of Russian-produced vaccines for their effectiveness against new variants spreading in different parts of the world.

"(A) recent study carried out by the Gamaleya Centre in Russia showed that revaccination with Sputnik V vaccine is working very well against new coronavirus mutations, including the strains firs found in the UK and South Africa," said Denis Logunov, a deputy director of the centre, which developed the Sputnik V shot.

Results of the trial are expected to be published soon, but this was the first indication of how the tests are going. No further details were available yet.

So-called viral vector shots - such as Sputnik V and a shot developed by AstraZeneca - use harmless modified viruses as vehicles, or vectors, to carry genetic information that helps the body build immunity against future infections.

The revaccination used the same Sputnik V shot, based upon the same adenovirus vectors. The trial indicated this did not impact effectiveness, Logunov said in a statement to Reuters.

Some scientists have raised the possible risk that the body also develops immunity to the vector itself, recognising it as an intruder and trying to destroy it.

But developers of Sputnik V disagreed this would pose long-term problems.

"We believe that vector-based vaccines are actually better for future revaccinations than vaccines based on other platforms," Logunov said.

He said that the researchers found that antibodies specific to the vectors used by the shot - which could generate an anti-vector reaction and undermine the work of the shot itself - waned "as early as 56 days after vaccination".

This conclusion was based on a trial of a vaccine against Ebola developed earlier by the Gamaleya Institute using the same approach as for the Sputnik V shot.

Vector immunity is not a new issue but has come under renewed scrutiny as companies including Johnson & Johnson anticipate regular Covid-19 vaccinations, like annual influenza shots, may be needed to combat new variants of the coronavirus.

A new coronavirus variant that shares some similarities with a more transmissible and intractable variant discovered in SA is on the rise in New York ...
News
1 year ago

Sahpra CEO Boitumelo Semete said the data would be evaluated for safety, quality and efficacy of SputnikV vaccine.
News
1 year ago

Pfizer executive says a third dose of their vaccine will create a similar or better response than the second dose, and could be the logical next step ...
News
1 year ago
Next Article