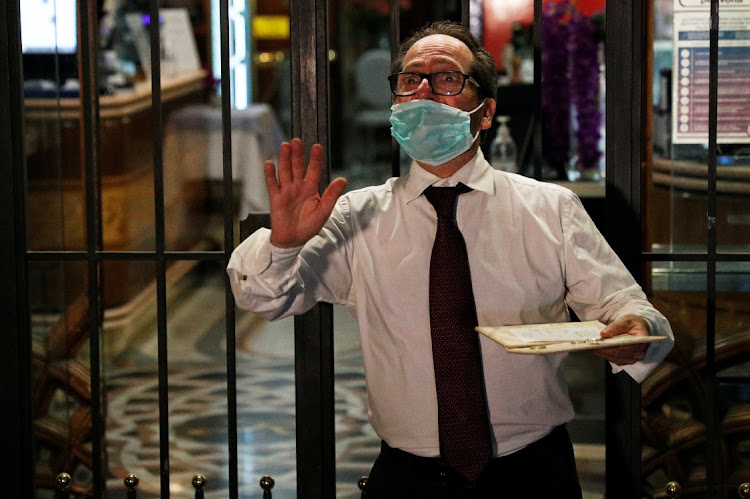 A waiter reacts as he prepares to close a bar in front of the Pantheon after the government introduced new restrictions to curb the coronavirus disease (COVID-19) infections in Rome, Italy, on October 26, 2020.
Image: GUGLIELMO MANGIAPANE

Italy's government on Saturday ramped up restrictions in five of the country's 20 regions in an effort to head off a rise in Covid-19 cases as scientists warned of a growing prevalence of highly contagious new variants.

Italy has established a four-tier colour-coded system (white, yellow, orange and red) which allows for measures to be calibrated according to infection levels, with assessments revised every week.

For the first time since the end of January, two regions -- Basilicata and Molise -- were shunted into the strictest red zone. This means bars and restaurants must be shuttered, movement severely restricted and all but essential shops closed.

Three regions moved from yellow to orange zones: Lombardy and Piedmont, which are centred on the wealthy northern cities of Milan and Turin respectively, and the central coastal region of Marche.

In these areas restaurants and bars are closed except for take-aways and people are not allowed to leave their towns except for emergencies, work and health reasons.

The island of Sardinia became the first region to be named a white zone, with only minimal restrictions.

Saturday's decision means that as of Monday, when it becomes effective, two regions will be classified as red, nine as orange, eight as yellow and one as white.

On Friday the health ministry signalled a continued rise in infections, with 20,499 new daily cases, up from 19,886 the day before. Over the last five days, new cases have increased by 35% by comparison with the same period last week.

Italy also reported 253 coronavirus-related deaths on Friday against 308 the day before. Deaths always lag the rise in cases.

"Many outbreaks are due to the (new) variants. I am concerned about the progress of the epidemic. We must keep up our guard and we must intervene promptly and strongly where needed," said Gianni Rezza, a senior health ministry adviser.

On Friday, in one of his first decisions in managing the health crisis since taking office earlier this month, Prime Minister Mario Draghi named Fabrizio Curcio as the new head of the Civil Protection Agency replacing Angelo Borrelli.

No reason was given for Borrelli's removal.

Along with regional restrictions, gyms remain closed virtually nationwide and opening hours for bars and restaurants are limited. Such curbs will almost certainly be confirmed until after Easter.

SA will pay $5.25 per dose for Covid-19 vaccines from the Serum Institute of India (SII) — well above what others, including developed nations, are ...
News
5 months ago

State's failure has forced SMEs to adapt or die

It will go down in all our memories as a day we will never forget: Millions of South Africans sat glued to their TV screens, watching President Cyril ...
Opinion
5 months ago

As South Africans battle to breathe and flood emergency wards, scenes reminiscent of the first wave of the pandemic that caused hospitals in Italy ...
News
5 months ago
Next Article