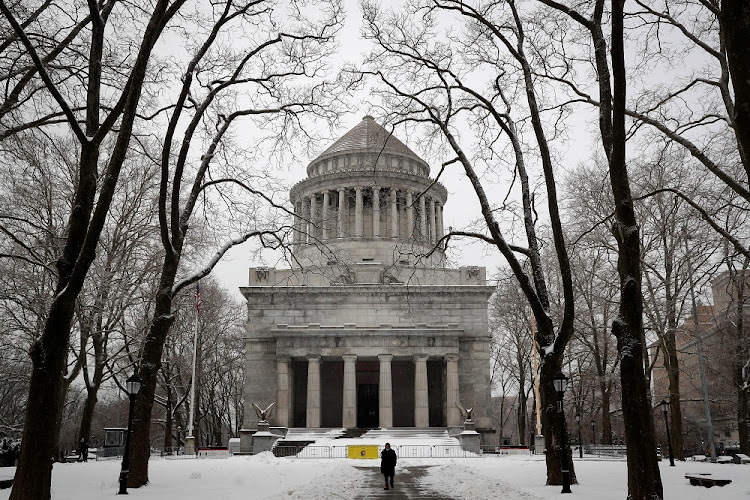 A man walks near the General Grant National Memorial in Riverside Park on Manhattan's upper west side during the second day of a winter storm in New York City, New York, US, February 19, 2021.
Image: REUTERS/Mike Segar

US President Joe Biden said on Friday he will approve a disaster declaration for Texas, clearing the way for more aid in a crippling winter storm as he weighed a trip to survey the federal response.

Millions of residents in the US' biggest oil and gas producer have dealt with power outages, and nearly half of Texans struggled on Friday with disrupted water service. Nearly two dozen deaths have been attributed to the storm and a cold snap.

The first crisis to develop in Biden's one-month-old term is testing the president's pledge to govern on behalf of Americans who opposed his candidacy, a campaign commitment the Democrat intended to contrast with Republican former President Donald Trump.

“As I said when I ran, I'm going to be a president for all Americans,” said Biden, who lost in Texas to Trump.

Millions of people in Texas awoke on Wednesday without heat again following a historic winter storm that has killed 21 people so far, as icy ...
News
1 year ago

“If I can do it without creating a burden for folks, I plan on going,” he said. A presidential visit to the state is being planned for next week.

The White House later said in a statement that Biden called the acting administrator at the Federal Emergency Management Agency (FEMA), Bob Fenton, to let him know he would approve Texas' request as soon as the agency forwards a formal request.

The White House has been in touch with mayors in Texas cities, including Houston and Austin, and officials in Dallas and other counties, to make sure they were connected to FEMA and have access to federal government resources, an administration official said separately.

Biden spoke to Governor Abbott on Thursday, and said the federal government would work with state and local authorities to offer relief to affected families.

Meanwhile, Republican Senator Ted Cruz continued to face a backlash for travelling to a Mexican resort city in the middle of the crisis. Cruz returned to Texas from his very brief trip to Cancun on Thursday. He has called the trip a “mistake.”

Congressional Democrats criticised Abbott and his fellow Republicans who control the state legislature on Friday, saying the crisis happened because they failed to upgrade the state's independent electricity grid.

“This was preventable because for years Republicans have turned their back on the fact that the Texas power grid was not able to handle extreme cold temperatures,” said Democratic US Representative Marc Veasey.

“We're now given reports that our grid was minutes, if not seconds, away from a complete collapse.”

A top Pfizer Inc scientist says the company is in intensive discussions with regulators to test a booster shot version of its coronavirus vaccine ...
News
1 year ago

A laboratory study suggests that the South African variant of the coronavirus may reduce antibody protection from the Pfizer Inc/BioNTech SE vaccine ...
News
1 year ago

Killer tornadoes in the US Southeast and historic sub-zero cold as far south as Texas were blamed on Tuesday for seven deaths and massive power ...
News
1 year ago
Next Article