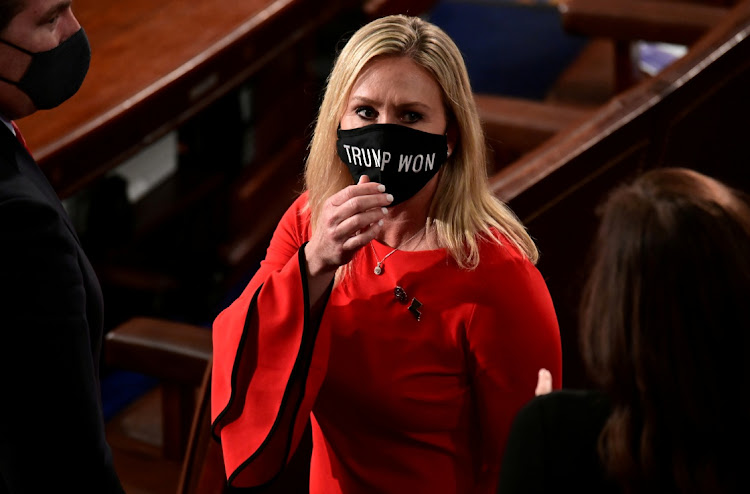 Representative Debbie Wasserman Schultz introduced a resolution to remove the newly elected representative from Georgia from her seats on the education and budget committees of the House of Representatives, and House Majority Leader Steny Hoyer said Democrats would vote on the measure if Republicans do not take action themselves to hold her accountable.

The House Rules Committee set a hearing on the measure for Wednesday, indicating it could be on the House floor for a vote later in the week.

Greene warned Democrats not to remove her from the committees, saying on Twitter that Republicans could do the same to Democrats if they gain the House majority in 2022 elections.

"And we will regain the majority, make no mistake about that," she wrote on Twitter.

"We can't stop her from speaking," Wasserman Schultz told an online news conference with two other Democrats, Representatives Ted Deutch and Jahana Hayes. "What we can do though, is essentially render her nearly powerless. That's what the intent of this resolution is."

A Democratic congresswoman said on Friday she plans to relocate her Capitol Hill office for safety reasons after being "berated" by an outspoken ...
News
10 months ago

Greene has supported false online claims that school shootings were staged, including the 2012 killings at Sandy Hook Elementary School in Newtown, Connecticut, and the 2018 massacre at Marjory Stoneman Douglas High School in Parkland, Florida.

"If you cannot acknowledge basic truths, that 26 children and adults were murdered in Sandy Hook Elementary School, and 17 more were mercilessly slain in Parkland High School, then you cannot be trusted to make education and budget policy," said Wasserman Schultz, who represents a Florida district next door to the district where Parkland is located.

Greene appeared to try to backtrack on Monday on some of her previous online comments, telling an interviewer that school shootings were "terrible" but that they did not have to happen if there could be a "good guy" at a school with a gun to protect students.

"These are not red-flag incidences, they are not fake and it's terrible, the loss that these families go through," Greene told One American News Network (OAN). "And it doesn't have to happen if we would protect our children properly."

Hoyer spoke with Republican Leader Kevin McCarthy on Monday about the matter, an aide said.

“It is my hope and expectation that Republicans will do the right thing and hold Rep. Greene accountable, and we will not need to consider this resolution. But we are prepared to do so if necessary," Hoyer said in a comment emailed to Reuters.

A representative for McCarthy said last week he was disturbed by Greene's comments and planned to have a conversation with her about them. There was no comment from his office on Monday.

U.S. law enforcement agents found bomb-making instructions inside the home of a member of the Proud Boys right-wing extremist group who was charged ...
News
10 months ago

Former U.S. President Donald Trump abruptly parted ways on Saturday with the two lead lawyers working on his defense for his Senate impeachment ...
News
10 months ago

Donald Trump opened an office in Florida on Monday that will handle his duties as a former U.S. president and seek to further his administration's ...
News
10 months ago
Next Article