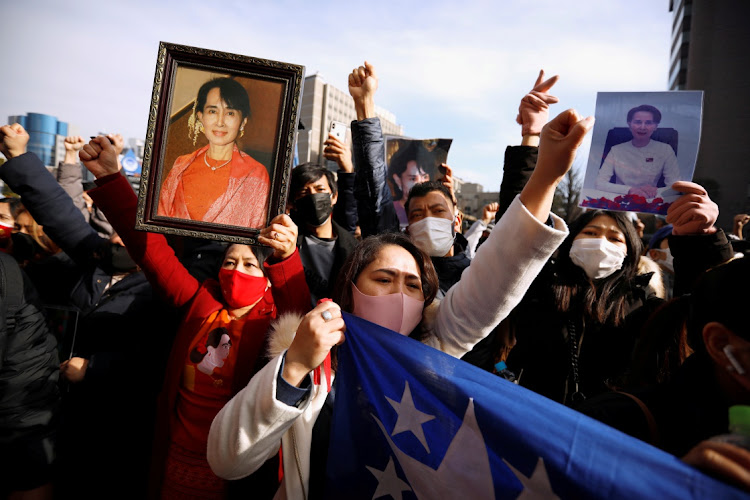 Aung San Suu Kyi's fall from grace as a rights icon has dampened Western enthusiasm for her as Myanmar's leader, but governments will still press for her release after Monday's coup in order to return to democratic rule, diplomats and lawmakers said.

Long celebrated as a pro-democracy activist, Suu Kyi won the Nobel Peace Prize while under house arrest in 1991, was later feted at the White House and became the subject of a 2011 film.

But as the country's elected leader since 2015, she has faced an international outcry at her defence of allegations of genocide against at Myanmar's Rohingya population.

Western leaders condemned Monday's seizure of power by the military and called for the release of those detained. But many European governments chose not mention her by name in their statements. Dutch Foreign Minister Stef Blok on Twitter demanded "the immediate release of all democratically elected politicians and civil society representatives".

Her party's landslide win in a Nov. 8 election, viewed as a referendum on Suu Kyi's fledgling democratic rule, means she is critical to any return to democracy, said Heidi Hautala, a vice president of the European Parliament and former Finnish government minister who met Suu Kyi in 2013 in Myanamar.

"But we won't forget what she said about the Rohingya people in the International Court of Justice. She has spoiled her international reputation as a human rights defender with her very open support of the military in the genocide issue," Hautala told Reuters.

In December 2019, Suu Kyi led a legal defence team to the World Court in The Hague, where the country faces allegations of genocide against its Muslim Rohingya population.

The Nobel committee faced calls for her to be stripped of her prize, and number of other cities and institutions, including the European Union, withdrew or suspended honours.

Myanmar's powerful military chief, Senior General Min Aung Hlaing, is in the spotlight after politicians from the ruling National League for ...
News
1 year ago

Suu Kyi failed us dismally – is Cyril next?

It is our heroes‚ the ones we adore‚ who have the capacity to break our hearts.
News
3 years ago

RESTORED AS A "MARTYR"?

Although Suu Kyi does not personally face charges, she backed the military and denied genocide.

An August 2018 United Nations report said the Myanmar military had carried out killings and mass rape with "genocidal intent" in the 2017 operation.

More than 730,000 Rohingya fled Myanmar to Bangladesh during the crackdown, during which U.N. investigators said 10,000 people may have been killed.

But Suu Kyi defended the violence in western Rakhine State as a counter-terrorism operations and asked the court "to remove the case from its list".

Laetitia van den Assum, a retired Dutch diplomat in Southeast Asia who regularly met Suu Kyi during the nearly 15 years between 1989 and 2010 when she was under house arrest, said her status as an icon of democracy was "almost irreparably tarnished".

"But nobody wants there to be a military regime in Myanmar," she said.

A senior EU diplomat based in Jakarta told Reuters her image might benefit from the coup, "restoring her position as a martyr" but that the West was now realising that despite her popularity at home, she had no sway over the military.

With only the United States and Britain having direct sanctions on Myanmar's powerful military chief Senior General Min Aung Hlaing, the EU could show its support for Suu Kyi by imposing punitive measures this month, although they may first choose to cut development aid, the senior EU diplomat said.