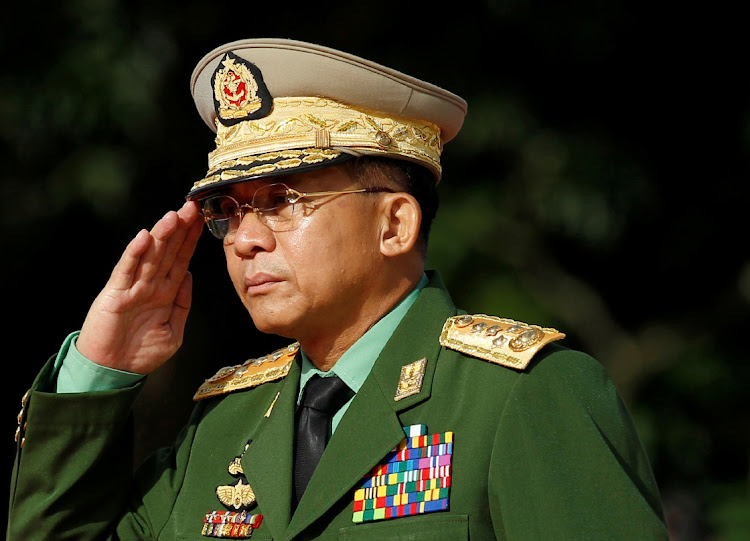 Myanmar's powerful military chief, Senior General Min Aung Hlaing, is in the spotlight after politicians from the ruling National League for Democracy (NLD) party were detained and the army announced it was taking power.

Myanmar's military is notoriously reclusive and even sophisticated observers know little about its inner workings.

Here are some key facts about its leader and the army's enduring role in the political system:

The military ruled directly for nearly 50 years after a 1962 coup and had long seen itself as the guardian of national unity.

As the architect of Myanmar's 2008 constitution, the military enshrined a permanent role for itself in the political system. It gets an unelected quota of 25% of parliamentary seats and its chief appoints ministers of defence, interior and border affairs, ensuring a key stake in politics, which has made for an awkward power-sharing arrangement with the NLD.

Many members of the party, including leader Aung San Suu Kyi, for years suffered persecution for opposing the former junta.

Min Aung Hlaing, 64, steered clear of the political activism that was widespread at the time when he studied law at Yangon University in 1972-1974. “He was a man of few words and normally kept a low profile,” one classmate told Reuters in 2016.

Thailand's prime minister on Tuesday attributed a recent surge in coronavirus cases to illegal migration and said additional regulations to fight the ...
News
4 months ago

According to a member of his DSA class, who spoke to Reuters in 2016 and who still sees the army chief at annual class reunions, he was an average cadet.

“He was promoted regularly and slowly,” said the classmate, adding that he had been surprised to see Min Aung Hlaing rise beyond the officer corps' middle ranks.

FROM SOLDIER TO POLITICIAN

Min Aung Hlaing took over the running of the military in 2011 as a transition to democracy began. Diplomats in Yangon said that by the onset of Suu Kyi's first term in 2016, Min Aung Hlaing had transformed himself from taciturn soldier into a politician and public figure.

Observers noted his use of Facebook to publicise activities and meetings with dignitaries and visits to monasteries. His official profile attracted hundreds of thousands of followers before being taken down in the wake of the army's offensive against the Rohingya Muslim minority in 2017.

Min Aung Hlaing studied other political transitions, diplomats and observers have told Reuters, and has made much of the need to avoid the chaos seen in Libya and other Middle Eastern countries after regime change in 2011.

The commander-in-chief has never shown any sign he was prepared to give up the military's 25% of seats in parliament nor of allowing any change to the clause in the constitution that bars Suu Kyi from becoming president.

The recent complaints by the army of irregularities in voter lists for a Nov. 8 general election which, as expected, delivered another sweeping victory to Suu Kyi's party, have been accompanied by cryptic comments about abolishing the charter.

Min Aung Hlaing extended his term at the helm of the military for another five years in February 2016, a step that surprised observers who expected him to step aside that year during a regular army leadership reshuffle.

In response, the US imposed sanctions on Min Aung Hlaing and three other military leaders in 2019 and several court cases in various international courts, including the International Court of Justice, are going on.