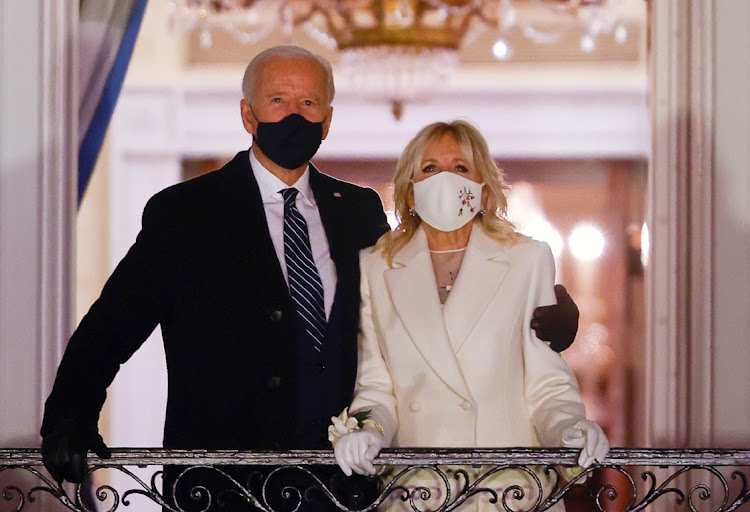 US President Joe Biden and first lady Jill Biden watch fireworks from the White House after his inauguration as the 46th President of the United States, US, January 20, 2021.
Image: REUTERS/Tom Brenner

US President Joe Biden signed half a dozen executive orders on Wednesday to reverse several hardline immigration policies put in place by former President Donald Trump, though migration experts warn that it will take months or longer to unravel many of the restrictions imposed in the past four years. In a sharp departure from his Republican predecessor, Biden, a Democrat, just hours after being sworn in also sent an immigration bill to Congress that proposes opening a path to citizenship for millions of immigrants living in the US unlawfully.

The executive actions, signed at a ceremony at the White House, included immediately lifting a travel ban on 13 mostly Muslim-majority and African countries, halting construction of the US-Mexico border wall and reversing a Trump order preventing migrants who are in the US illegally from being counted for congressional districts.

Biden also signed a memorandum directing the Department of Homeland Security (DHS) and the US attorney-general to preserve the Deferred Action for Childhood Arrivals (DACA) program, which protects migrants who came to the country as children from deportation, and reversed Trump's executive order calling for stricter immigration enforcement away from the country's international borders. Biden's DHS also issued a memorandum calling for a 100-day moratorium on some deportations.

After taking the oath of office and a brief dash to shake some hands, Joe Biden made it safely to the White House in a barricaded city guarded by ...
News
9 months ago

DHS also said it would end all enrolments in a controversial Trump program — known as the Migrant Protection Protocols — that forced more than 65,000 asylum seekers back to Mexico to wait for US court hearings. The release did not clarify what will happen to migrants now in the program, many of whom have been stuck for months in squalid tent camps near the southwest border.

The actions show that Biden is beginning his presidency with a sharp focus on immigration, just as Trump kept the issue at the centre of his policy agenda until the last days of his administration — though they come at the issue from radically different perspectives. In one of his rare post-election public appearances, Trump earlier this month visited a section of the US-Mexico border wall, which he had ordered built by shifting funds, partly from the military budget.

Biden's decision to immediately roll back Trump's travel ban won praise from business groups and migrant advocates. Myron Brilliant, the head of international affairs at the US Chamber of Commerce, said the ban was “was not aligned with American values” and its reversal would help “restore our credibility on the global stage.”

Since the outbreak of the coronavirus pandemic, travel to the US has been curbed and DHS said in its announcement Wednesday that current non-essential travel restrictions will remain in place.

Biden has not yet laid out clear plans for a March 2020 order issued by the US Centers for Disease Control and Prevention that allows officials to expel almost all border crossers. Since the order was put in place, about 380,000 people have been quickly sent to their home countries or pushed back to Mexico, according to US Customs and Border Protection data.

Incoming national security adviser Jake Sullivan said on a call with reporters on Tuesday it would be “unwise” for migrants to come to the border now because of limited capacity to process asylum say.

Biden, 78, became the oldest US president in history at a scaled-back ceremony in Washington that was largely stripped of its usual pomp and ...
News
9 months ago

“The situation at the border is one we intend to change, but it is going to take considerable time,” he said.

In Central America in recent weeks, migrant caravans have been on the move, with some aiming to arrive at the southwest border after Biden's inauguration.

The president plans additional immigration moves soon. On Jan. 29 he will issue executive actions to restore US asylum protections, strengthen refugee processing and set up a task force to reunify families still separated by Trump's border policies, according to a memo shared with lawmakers and obtained by Reuters.

The Biden administration will also review barriers to legal immigration put in place by Trump over the past four years, including a regulation that made it harder for poorer immigrants to get permanent residency, the memo said.

Lifting the travel ban and implementing executive orders may be an easier task than getting Congress to pass Biden's ambitious immigration bill. It lays out an eight-year road map to citizenship for many of the estimated 11 million immigrants living in the country unlawfully, according to a fact sheet distributed to reporters by incoming White House officials on Tuesday.

Eligible immigrants who were in the country as of Jan. 1 and meet certain requirements would be given a temporary status for five years before being granted green cards. They could apply for citizenship after three more years, officials said.

The wait time for legalisation would be shorter for DACA recipients and immigrants living in the US with Temporary Protected Status (TPS), both programs Trump tried to end. It would also be expedited for some farmworkers.

While Democrats effectively hold a majority in the US House of Representatives, the Senate will be divided 50-50 with Vice President Kamala Harris holding the tiebreaking vote. A lack of bipartisan support has torpedoed past efforts to overhaul the immigration system.

On Tuesday, Republican Senator Marco Rubio called the bill a “non-starter” that included “a blanket amnesty for people who are here unlawfully.”

Advocates acknowledge privately the bill will probably serve more as a statement of goals to set the stage for a series of smaller, single-issue bills that might attract more bipartisan support.