Variant found in family of four travelling from Britain 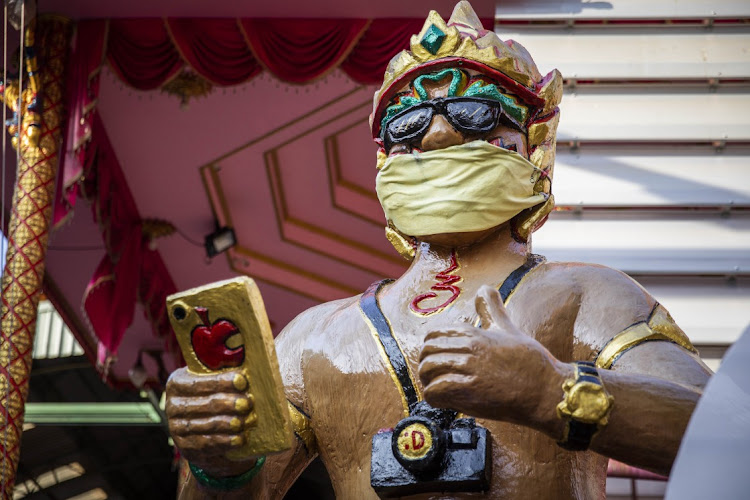 A statue outside of Wat Taklen wears a face mask in Bangkok, Thailand, where the new variant has been recorded.
Image: Lauren DeCicca/Getty Images

Bangkok – Thailand's government held off from ordering new nationwide business shutdowns yesterday amid a wave of coronavirus cases, but empowered some provincial governors to set their own restrictions and pleaded with the public not to travel.

Thailand, which had largely controlled the virus by mid-2020, saw a second wave of outbreaks beginning last month. Yesterday, it confirmed 315 new coronavirus cases, the majority of which are local transmission, bringing its total to 7,694 cases and 64 deaths since its first case last January.

Samut Sakhon, a province south of Bangkok where the current outbreak started, reported 541 additional cases yesterday. .  The country also reported its first known case of a more contagious variant of the coronavirus called B.1.1.7 yesterday, Yong Poovorawan, a senior virologist from Chulalongkorn University in Bangkok, said in a post on his official Facebook page.

The variant was found in a family of four who were in quarantine after arriving in Thailand from Britain, and Yong said there was no risk of that variant being spread in Thailand. Opas Karnkawinpong, the director-general of the department of disease control, said health ministry has recommended the government to slow all flights from Britain until there was more information about the new strain.

Officials say the current domestic outbreak is linked to illegal border migration from neighbouring Myanmar. The government has designated 28 provinces, including Bangkok, as high-risk zones, recommending suspension of some businesses and crowded activities.The education ministry has ordered all public and private schools and vocational training centres to close down from yesterday until end of the month. Thai Retailers Association has also announced that all shopping malls around the country should close at 9pm daily, an hour earlier than the usual closing time, a statement said. – Reuters

Only about 2.8 million Americans had received a COVID-19 vaccine going into the last day of December, putting the United States far short of the ...
News
1 year ago

As Asia says goodbye to 2020 - a tumultuous year that saw the planet roiled by a deadly pandemic - celebrations will be smaller, shorter and more ...
News
1 year ago
Next Article