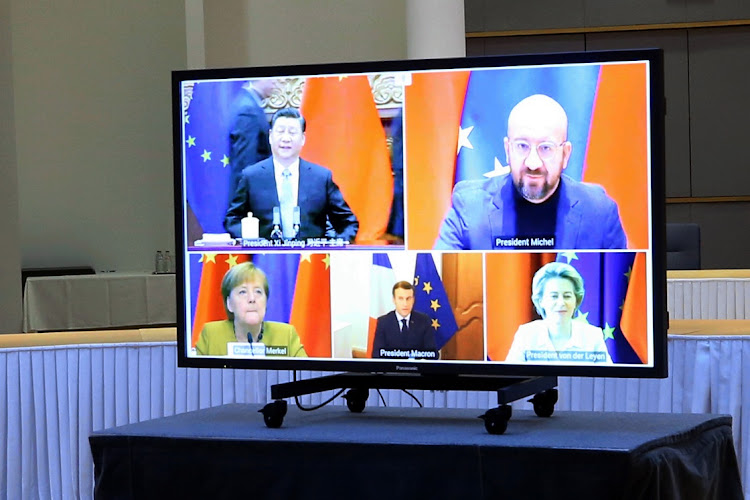 BRUSSELS - The European Union and China agreed on Wednesday to an investment deal that will give European companies greater access to Chinese markets and help redress what Europe sees as unbalanced economic ties.

The agreement has been nearly seven years in the making and is likely to take at least another year to enter into force. It forms part of a new relationship with China, which the EU views as both a partner and a systemic rival.

Companies that could benefit include Daimler, BMW , Peugeot, Allianz and Siemens , all with a large presence in China.

China will ban the forced transfer of technology from foreign companies, and has pledged to be more transparent on subsidies and bar state-owned enterprises from discriminating against foreign investors.

Britain on Wednesday became the first country in the world to approve a coronavirus vaccine developed by Oxford University and AstraZeneca as it ...
News
4 months ago

Interpol warns of fake vaccines targeting the desperate in SA

The deal brings Europe a degree of parity with the United States, which has struck a "Phase I" trade deal with China. Jake Sullivan, President-elect Joe Biden's pick as national security adviser, tweeted last week that the new U.S. administration would welcome early consultations with Europe on China's economic practices.

The deal includes commitments on climate change and labour rights. Commitments are reciprocal, but the EU market is already far more open. Brussels has given some ground in energy, but says its offer to China consists chiefly of guaranteeing the existing openness.

The deal was struck after an online meeting between the heads of EU institutions and Chinese President Xi Jinping. The agreement, he said, showed China's determination and confidence to open up.

It would stimulate the global economy as it recovers from the coronavirus pandemic and increase mutual trust, he added.

Hosuk Lee-Makiyama, director of trade think tank ECIPE, said that although there was little obvious benefit for Beijing in the text, China wouldn't have signed up without some promise of advantage.

"No major power, not least China, gives anything for free, so there will be a trade-off. It's just not in the agreement," he said.

Compared with a trade deal, which might include retaliatory tariffs, such an investment deal is also more difficult to enforce, Lee-Makiyama said, noting that the EU would be unlikely, for example, to seize Chinese assets.

The EU has been keen to portray the agreement as a step towards forging multilateral rules. It still does not cover issues including trade flows or public procurement for the likes of telecoms equipment maker Huawei.

The bloc intends to push through laws securing greater reciprocity in public procurement and tighter control of foreign subsidies.

In a high-walled Art Deco villa in the Hong Kong suburbs of Kowloon, the Vatican operates an unofficial diplomatic mission, its only political ...
News
4 months ago

BEIJING - Drugmakers have agreed to cut prices by around 50% on average for more than 100 medicines in order to have them included in China's state ...
News
4 months ago
Next Article