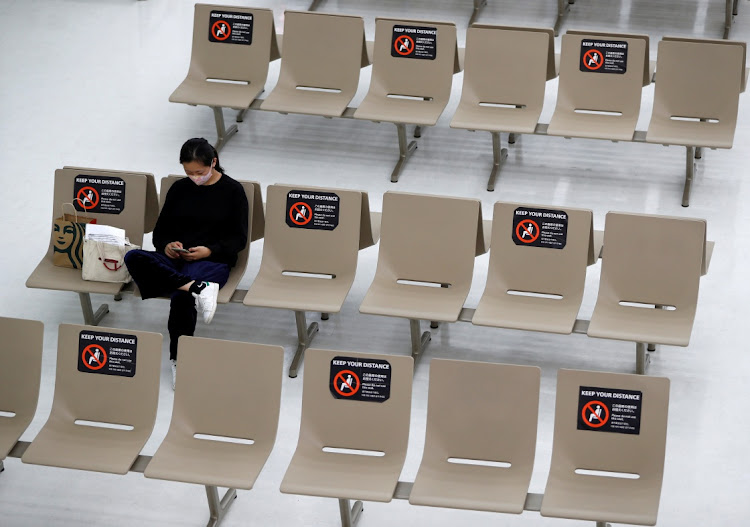 FILE PHOTO: Signs for social distancing are seen on seats at the arrival zone of Narita International Airport, where there are fewer passengers than usual amid the coronavirus disease (Covid-19) outbreak, in Narita, east of Tokyo, Japan. File photo
Image: REUTERS/Issei Kato/File Photo

Japan on Saturday said it would temporarily ban non-resident foreign nationals from entering the country as it tightens its borders after the detection of a new, highly infectious variant of the coronavirus.

The ban will take effect from December 28 and will run through January, the government said in an e-mailed statement.

Japanese citizens and foreign residents will be allowed to enter but must show proof of a negative coronavirus Test 72 hours before departing for Japan and must quarantine for two weeks after arrival, the statement said.

South Africa has identified a new variant of the novel coronavirus, which authorities believe is driving a surge in COVID-19 infections that could ...
News
1 year ago

Japan on Friday reported its first cases of a fast-spreading variant in passengers arriving from Britain. The new variant has also been detected in a man who visited the UK and a family member — the first cases of infected people found outside airport checks — Nippon TV reported on Saturday.

The new strain adds to worries about a surge in cases as Tokyo reported another record rise on Saturday.

Infections of the virus that causes Covid-19 hit a record 949 in the capital just as Japan heads into New Year holidays that normally see people stream from the capital into the provinces.

Serious cases were unchanged from a day earlier at 81.

With New Year celebrations centred on family gatherings and mass visits to temples and shrines, experts have warned public restraint will be essential to prevent infection rates from rising further amid concerns of pandemic fatigue.

Suga's initial political honeymoon after taking his post in September has ended, with his popularity sliding after criticism he was slow to react to rising infections in Tokyo and for attending a group steak dinner in defiance of his own calls for caution.