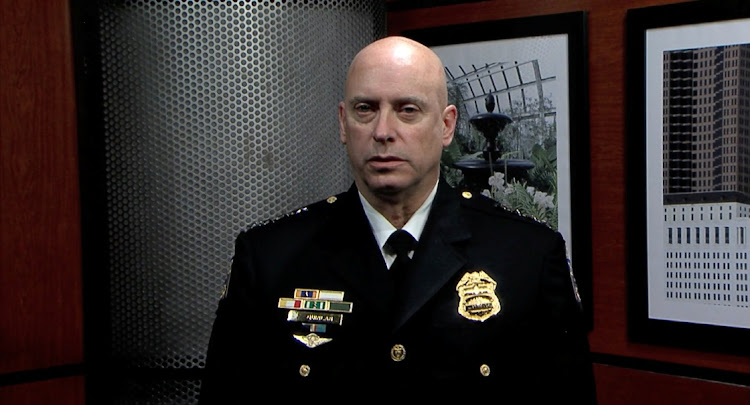 The chief of police in Columbus, Ohio, said on Thursday he has concluded that an officer who fatally shot an unarmed Black man earlier this week engaged in an act of "senseless violence" that should immediately cost the officer his job.

Chief Thomas Quinlan announced his recommendation that the city fire the policeman in a somber videotaped statement that he posted online, two days after Andre Maurice Hill, 47, was gunned down in the garage of a house where he was staying as a guest.

Quinlan said he filed two departmental charges of "critical misconduct" against the officer, Adam Coy, stemming from an expedited internal investigation of what the chief called Coy's "unreasonable use of deadly force" and "failure to render aid" to Hill after he was shot.

The city's public safety director will hold a hearing on Monday to rule on the police chief's recommendation that Coy, a 19-year veteran of the force already relieved of duty, be dismissed, Quinlan said.

A police officer was relieved of duty on Tuesday following his involvement in the killing of a Black man in Columbus, Ohio, according to Mayor Andrew ...
News
1 year ago

"This didn't have to happen, and it never should have," he said. "Andre Hill should be with his family this holiday."

Hill's slaying marked the second time in a month that an African-American man was slain by law enforcement under questionable circumstances in Ohio's capital.

Casey Christopher Goodson, 23, was shot dead outside his home on Dec. 4 by a Franklin County sheriff's deputy assigned to a team of U.S. marshals searching for a fugitive in Goodson's neighborhood.

The latest incident unfolded in the early hours of Tuesday after police responded to a non-emergency report of a man turning a car on and off for an extended period, Columbus police said in a statement.

Footage from Coy's body-worn camera showed Hill emerging from the shadows of the garage holding up a glowing cell phone in one hand before the officer opens fire on him. Hill died a short time later at a hospital.

Although neither Coy, who is white, nor a second officer on the scene activated their body cameras until just after shots were fired, the moments just before and including the shooting were captured on video without sound because of an automatic 60-second "look-back" function.

Once the audio comes on, Coy is heard shouting at Hill to make his hands visible and to roll onto his stomach as Hill lies moaning on the ground beside the car.

Reuters could not determine if Coy has retained legal representation.

In his statement, Quinlan insisted his determination was not a rush to judgment. "I have seen everything I need to see," the police chief.

Quinlan said state-level authorities were handling a separate criminal investigation into the shooting, and that prosecutors would determine whether any charges would be brought. Other officers involved also remain under review, he said.

Cops to face music for 'unprovoked' attack on man

Six police officers are being investigated for their alleged involvement in the brutal attack of a man they apparently accused of shooting someone.
News
1 year ago

New York police arrested about 30 people as hundreds of protesters took to the streets in Brooklyn late on Tuesday following a deadly police shooting ...
News
1 year ago
Next Article