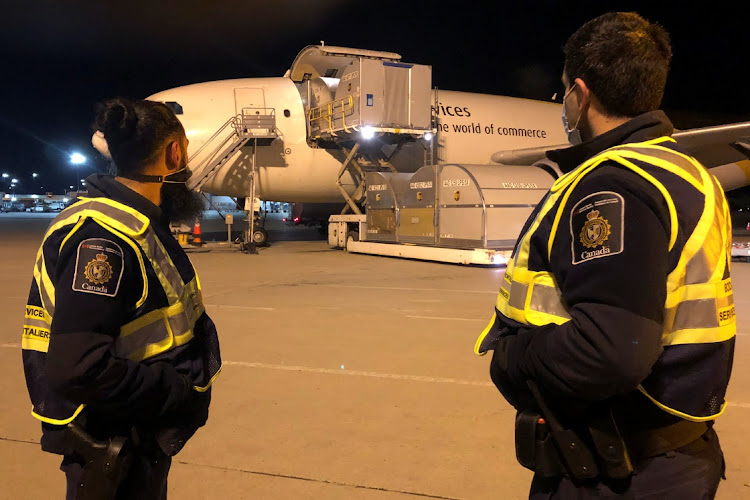 Los Angeles — The first shipments of Pfizer’s Covid-19 vaccine left a factory in Michigan early yesterday on a convoy of trucks, kicking off a historic effort to stop a surging pandemic that is claiming more than 2,400 lives a day in the US.

Mask-wearing workers at a Pfizer factory began packing the first shipments of its vaccine in dry ice. Three trucks carrying pallets of boxed, refrigerated vaccines rolled away from the Kalamazoo facility, escorted by security officers wearing body armour in a bakkie and an SUV.

The US expects to immunise 100-million people, or about 30% of its population, by the end of March, US Operation Warp Speed chief adviser Moncef Slaoui said in an interview with Fox News yesterday.

In a novel process that will need to become daily routine, workers removed pizza box-sized cartons containing vaccine vials from a freezer. They placed them in large blue coolers before these were boxed and labelled.

The huge logistical effort is complicated by the need to transport and store the vaccine developed with German partner BioNTech SE at -70°C, requiring enormous quantities of dry ice or specialised ultra-cold freezers.

Workers clapped and whistled as the first boxes headed to the trucks. The long-awaited moment comes as the US death toll is approaching 300,000 and infections and hospitalisations set daily records. It will take months before most US residents can get a Covid-19 vaccine.

Companies in a range of industries are lobbying state and federal officials to give priority to their workers as millions wait for the vaccine and a return to life free from the fear of the deadly illness.

The Pfizer/BioNTech vaccine was 95% effective in preventing illness in a large clinical trial. It is not yet known if it prevents infection or transmission of Covid-19 by those who are vaccinated.

US regulators authorised emergency use of the vaccine late on Friday, after similar moves by the UK and Canada, less than a year after the first cases were reported in the US. — Reuters

Moderna Inc said on Friday the US government will get an additional 100 million doses of its Covid-19 vaccine candidate, expected to be delivered in ...
News
1 year ago

'A little person in history': the adolescents who signed up to test the Covid vaccine

Two adolescent siblings in the United States who signed up for a coronavirus vaccine trial said they did it because they wanted to make their own ...
News
1 year ago
Next Article