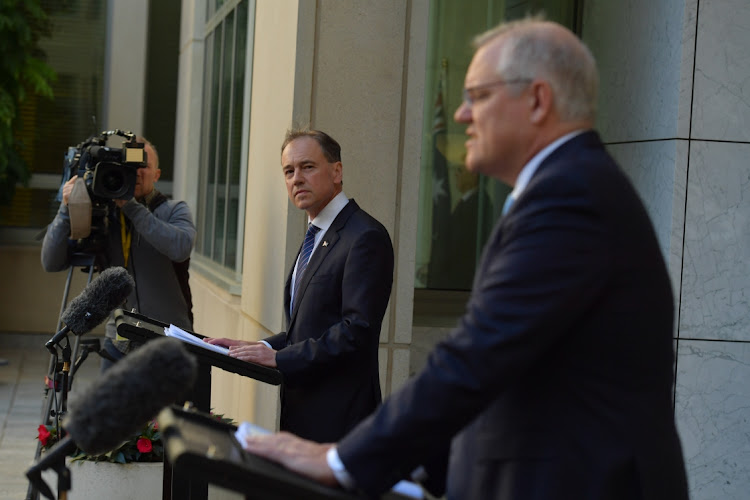 Prime Minister Scott Morrison and Minister for Health Greg Hunt (left) during a press conference - Clinical trials of a Covid-19 vaccine being developed by the University of Queensland in partnership with biotech company CSL will be abandoned, after the Federal Government had committed to purchasing, and agreements had been made to secure 51 million doses of the vaccine.
Image: Sam Mooy/Getty Images

Australia cancelled the production of a locally made vaccine against Covid-19 after trials showed it could interfere with HIV diagnosis, with the government instead securing additional doses of rival vaccines.

Antibodies generated by the vaccine being developed by the University of Queensland (UQ) and biotech firm CSL, one of four candidates contracted by the Australian government, were found to lead to some false positive HIV test results, the makers said.

While the vaccine had elicited a “robust” immune response to the novel SARS-COV-2 virus without serious adverse effects in a Phase 1 trial with 216 participants, re-engineering a fix could take another 12 months, they said.

CSL and the Australian government had together decided to stop Phase 2 and Phase 3 trials.

“While this is a tough decision to take, the urgent need for a vaccine has to be everyone's priority,” said UQ professor Paul Young.

The government said it has also secured additional doses of Novavax vaccines.

Australia also has a contract for 10 million doses of a vaccine being developed by Pfizer, with regulatory approval expected by January 2021.

JPMorgan analysts said the cancellation of the CSL contract removed an “important” opportunity for the vaccine maker that would have brought it A$100 million ($75 million) in extra revenues. CSL shares fell 3.2% on Friday, underperforming a slightly weaker broader market.

All up, Australia has secured 140 million vaccine units to inoculate its 25 million people, one of the highest ratios of vaccine purchases to population in the world, officials said.

The cancellation was announced before Prime Minister Scott Morrison's final meeting this year with state and territory leaders in Canberra — their first in-person meeting in nine months — to plan the vaccination rollout and to develop seasonal visas for skilled workers and students.

“We want to ensure that Australians ... have full confidence, absolute full confidence that when it gets the tick, they can get the jab, and they can make that decision for themselves and for their families, confidently,” Morrison told reporters.

Despite suffering significant economic hits due to Covid-19, Australian consumer sentiment is climbing again as the country re-emerges from the pandemic faster than most.

Australia's tally of 28,000 Covid-19 infections is far fewer than in many other developed countries, and with only sporadic cases of the virus now showing up, it has not raced to start vaccinations as in North America and parts of Europe.

The country is scheduled to start vaccinations in March 2021 and expects to inoculate its whole population by the end of the year.

The US on Wednesday crossed an ominous new threshold of more than 3,200 lives lost to Covid-19 in a single day while public health officials stepped ...
News
10 months ago

A man has been fined a whopping R53,000 for breaking strict Covid-19 regulations in Taiwan – for just eight seconds.
News
10 months ago
Next Article