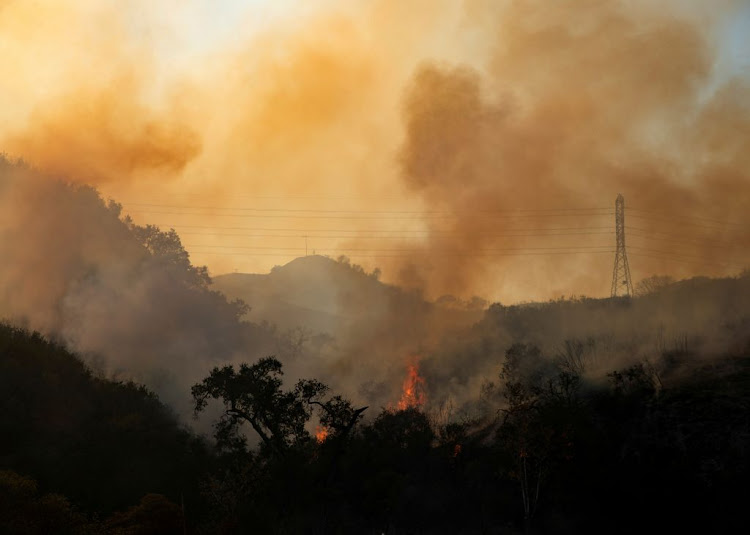 The Bond Fire wildfire continues to burn next to electrical power lines near Modjeska Canyon, California, US, on December 3 2020.
Image: REUTERS/Mike Blake

Firefighters have made some progress reining in a blaze in a Southern California canyon, but faced more high winds and low humidity on Friday that threatened to stoke the flames which had forced thousands to leave their homes.

The Bond Fire was less than a third contained after it broke out on Wednesday on the road for which it is named and quickly engulfed much of Silverado Canyon, driven by strong Santa Ana winds.

“Continued mapping of the Bond fire has it at 7,375 acres with 30% containment,” fire officials in Orange county said on Twitter, or an area of 2,985 hectares.

Continued mapping of the #BondFire has it at 7,375 acres with 30% containment. There are 1,560 personnel working on the incident. Firefighters & 11 helicopters continued to mop up hot spots & improve containment lines today. pic.twitter.com/IGFoVfMbR2

“Firefighters worked through the night extinguishing hotspots, mopping up around structures and stopping the forward spread of this fire,” county fire official Paul Holaday said in a video posted to Twitter.

Air and ground units were focused on protecting the canyon communities of Silverado, Santiago, Williams and Modjesca, he added.

Two firefighters taken to hospital with injuries on Thursday were released and were “doing okay,” the fire officials said on Twitter.

The National Weather Service issued a red flag warning of gusty winds until 10pm on Saturday for the inland part of the county.

Utility Pacific Gas and Electric Co said it stood ready to cut power in some northern and central parts of the state form early on Monday as dry conditions and expected high winds heighten damage risks.

As many as 25,000 people had been forced to flee the blaze but by Friday morning officials had lifted some evacuation orders, including those for the Lake Forest community.

On Twitter, the Orange County Fire Authority said the blaze started as a structure fire in Silverado Canyon on Bond Road that “fully engulfed a home”. Strong winds then drove the flames into nearby vegetation, officials said.

Residents said the flames erupted when a home generator exploded.

Since the start of the year, wildfires have scorched more than 6,500 sq miles (17,000 sq km) of California land, the state's forestry department says.

The land area burnt each year in the western US has grown eight times larger in less than four decades, US Forest Service researchers said last month.

California Governor on Friday toured communities devastated by the state's raging wildfires and said the deadly, record-shattering fire season across ...
News
1 year ago

U.S. Senator Kamala Harris gives the most important speech of her political career on Wednesday when she addresses the Democratic National Convention ...
News
1 year ago