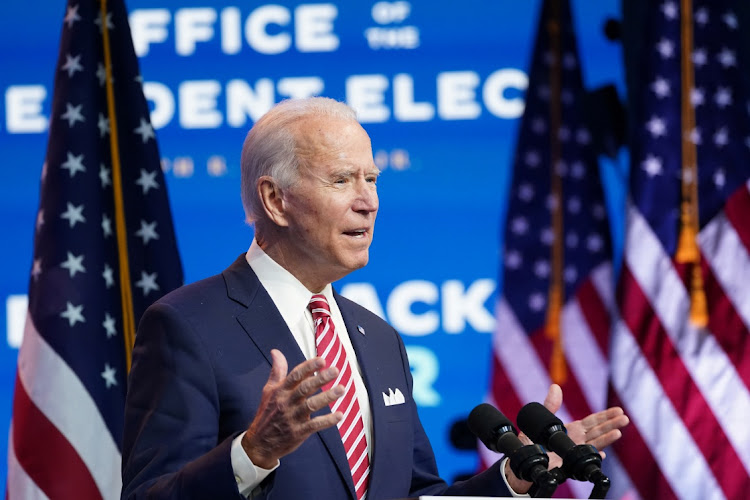 U.S. President-elect Joe Biden said Biden again called upon Trump to cooperate with the transfer of power, arguing that the resurgent Covid-19 pandemic meant lives were in the balance.
Image: REUTERS/Kevin Lamarque

President-elect Joe Biden will focus on shaping his core White House team on Tuesday while outgoing President Donald Trump presses on with his increasingly tenuous legal fight to reverse his loss in the U.S. election.

Several of Biden's senior campaign staff have been discussing their roles in the transition and new administration that takes over Jan. 20 - and some of those roles could be announced as soon as Tuesday, according to a person familiar with the matter.

U.S. Representative Cedric Richmond, who was a national co-chair of Biden's campaign and former chair of the Congressional Black Caucus, is expected to join the administration in a senior capacity, as is Steve Ricchetti, who has long been a close adviser to Biden, the person said. Richmond's move would leave his Louisiana congressional seat open.

Jen O'Malley Dillon, who was brought in early this year as Biden's campaign manager and is the first woman to lead a winning Democratic presidential bid, is expected to be named a deputy chief of staff, media outlets reported.

None of the potential appointees replied to requests for comment. A spokesman for Biden's transition team declined to comment.

Biden, a Democrat, is also set to receive a briefing on national security threats from his own advisers. Trump, who has not conceded the Nov. 3 election, has blocked him from receiving classified intelligence briefings usually provided to the successor in a transition.

In an indication of the national security challenges that Biden will inherit, Reuters reported late on Monday that Trump last week asked for options on attacking Iran's main nuclear site but ultimately decided against taking the dramatic step.

President Donald Trump appeared on Sunday to publicly acknowledge for the first time that his Democratic rival Joe Biden won the November 3 US ...
News
1 year ago

Trump, a Republican, meanwhile will bring his floundering effort to overturn Biden's victory to a federal court in Pennsylvania, where another legal setback would likely doom his already long-shot prospects.

U.S. District Judge Matthew Brann will hear arguments in a lawsuit the Trump campaign brought on Nov. 9 that seeks to halt the state's top election official from certifying Biden as the winner.

The Trump campaign, after narrowing the scope of the case, is focusing on a claim that voters were improperly allowed to fix ballots rejected because of technical errors like a missing "secrecy envelope."

Three more lawyers representing Trump's campaign asked to withdraw from the suit on Monday after a prominent regional firm, Porter Wright Morris and Arthur, dropped out of the case last week. A Trump legal adviser called the last-minute shuffle "routine."

So far, Trump's furious efforts to have courts throw out ballots or delay certification of the results in key states have been roundly defeated. On Monday, the Wisconsin Elections Commission said a vote recount would cost an estimated $7.9 million, money that Trump's campaign in that battleground state would have to pay in advance should it request one.

Trump has remained angry and defiant on social media even as some prominent Republicans on Capitol Hill and elsewhere have quietly asserted that Biden should be considered the president-elect.

At a press conference on Monday, Biden again called upon Trump to cooperate with the transfer of power, arguing that the resurgent Covid-19 pandemic meant lives were in the balance.

"More people may die if we don't coordinate," he said.

Biden urged Congress to pass pandemic relief assistance. Talks on such legislation stalled for months before the Nov. 3 election.

The president-elect will address state governors on Thursday regarding measures to reduce the coronavirus case count and vaccine distribution, according to a spokesman for the National Governors Association.

Biden insisted, however, that Trump's refusal to concede was not inhibiting his transition efforts. "I find this more embarrassing for the country than debilitating for my ability to get started," he said.

Biden beat Trump by the same 306-232 margin in the state-by-state Electoral College that prompted Trump to proclaim a "landslide" victory in 2016. Biden also won the national popular vote by at least 5.6 million votes, or 3.7 percentage points, with some ballots still being counted.

Election officials from both parties have said there is no evidence of major irregularities. Federal election security officials have decried "unfounded claims" and expressed "utmost confidence" in the election's integrity.

Donald Trump's supporters will take to the streets on Saturday to back his unsubstantiated claims of election fraud as he pushes ahead with a flurry ...
News
1 year ago

Fuel price data shows a mixed fuel price outlook for the end of November, with rand appreciation being countered by a sharp spike in international ...
News
1 year ago

President-elect Joe Biden cemented his electoral victory by capturing the battleground state of Arizona late on Thursday, but the transition to his ...
News
1 year ago
Next Article