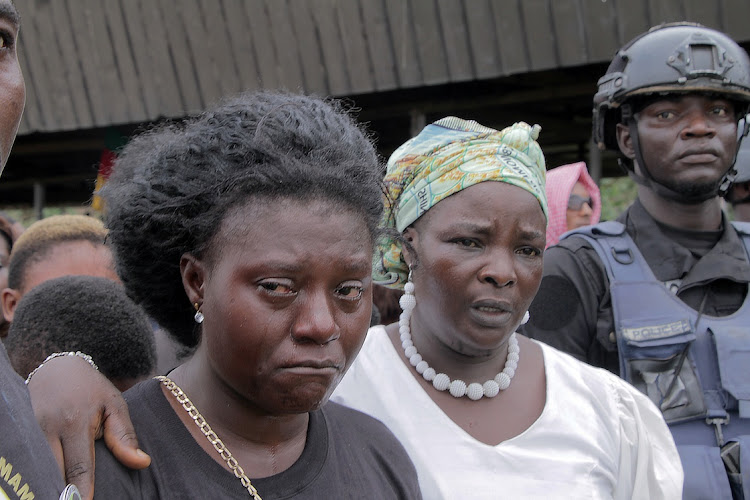 Manyi Tita mourns her 10-year-old daughter who was killed by unidentified assailants in a classroom of a secondary school during a mass funeral in Kumba, Cameroon November 5, 2020.
Image: REUTERS/Blaise Eyong

The plaque on Nzakame Rhema's coffin marks the "sunset" of her short life - Oct. 24, 2020, the day gunmen burst into her school in Cameroon's South West region and killed seven children.

In the town of Kumba on Thursday, hundreds of people came to pay their respects as the children's coffins, draped in the Cameroonian flag, were laid next to their portraits. Gospel choirs sang and speakers offered prayers.

The children were buried later in separate funerals.

"My heart bleeds a lot because her death was so tragic," said Rhema's weeping mother, Manyi Tita. "My daughter never committed any crime. The only thing she did was go to school for a better future and ... to be a better lady." 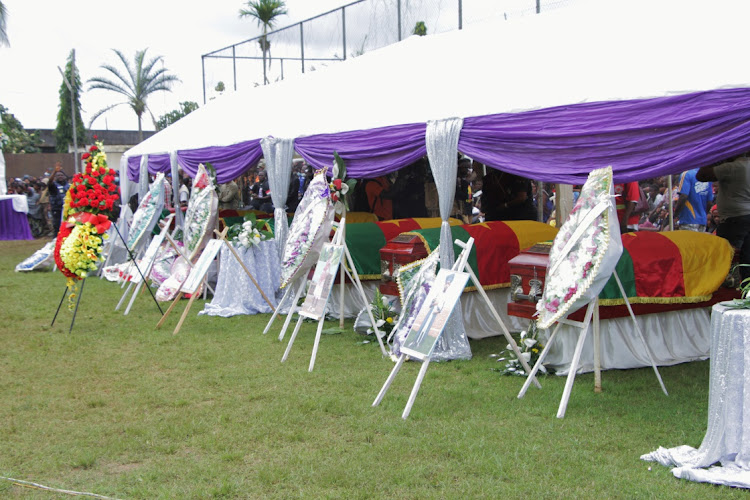 Flag-draped caskets of seven children who were killed by unidentified assailants in a classroom of a secondary school are pictured during their mass funeral in Kumba, Cameroon November 5, 2020.
Image: REUTERS/Blaise Eyong

The outdoor ceremony represented an outpouring of grief but also anger that a conflict between separatist insurgents and the Cameroonian army had spiralled so far that a group of men with AK 47 rifles could walk into a school and open fire indiscriminately.

No-one has claimed responsibility for the shooting, but it carried the hallmarks of previous attacks by English-speaking separatists who have been fighting since 2017 to break away from the mainly French-speaking Central African country.

The killing was followed by the kidnapping of eleven teachers during raids on two schools. They were released on Thursday.

"This struggle must continue but our children must go to school," said mourner Kalin Nkendoh. "If the boys (the secessionists) think they want to use our children's schools as shields, as a weapon, they have failed."

Eleven kidnapped teachers have been freed in western Cameroon, where separatist insurgents are battling government forces, the church that runs the ...
News
1 year ago

Cybersex criminals in Africa have 'free rein', and the continent’s girls and young women suffer frequent and horrific abuse as a result
News
2 years ago
Next Article