Biden poised for U.S. election win as his lead over Trump grows 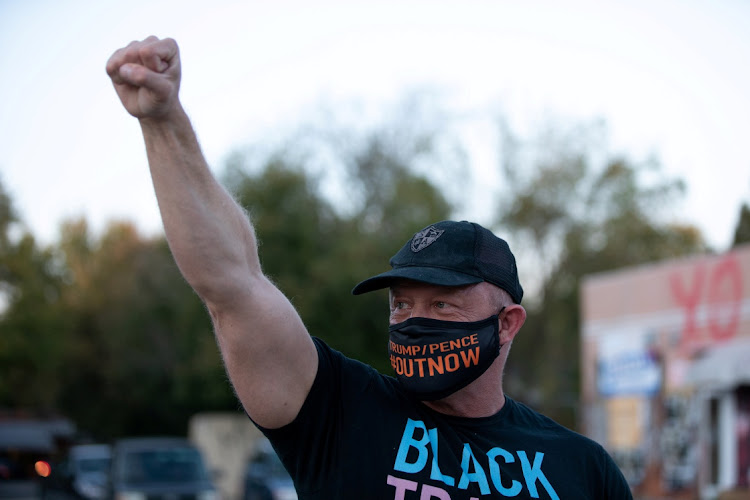 A protester wearing a "Trump/Pence #outnow" face mask demonstrates against U.S. President Donald Trump as votes continue to be counted following the 2020 U.S. presidential election, at an intersection near Downtown in Atlanta, Georgia, U.S. on November 6, 2020.
Image: REUTERS/Dustin Chambers

Democrat Joe Biden appeared poised for victory in the U.S. presidential election on Saturday as vote counts in key states leaned his way, while President Donald Trump showed no sign of conceding despite his increasingly bleak chances.

In remarks on Friday night, Biden predicted he would win but did not declare victory. Television networks held off from projecting a winner because votes are still being counted and margins are close in the four states that will determine the result.

"The numbers tell us ... it's a clear and convincing story: We're going to win this race," Biden said from his home state of Delaware, adding that he and his running mate Kamala Harris were already meeting with experts as they prepared to start their administration on Jan. 20.

Trump, 74, has been defiant as his chances fade for securing a second four-year term. He has made repeated and unfounded claims of electoral fraud, including from the White House briefing room on Thursday night, while his campaign pursues lawsuits that legal experts say are unlikely to alter the election outcome.

Americans have been waiting longer than any presidential election year since 2000 to learn the winner, with vote counting slowed by a record number of mail-in ballots. The Covid-19 pandemic prompted many to avoid voting in person on Tuesday's Election Day.

Former Vice President Biden, 77, has the math largely on his side with a 253-to-214 lead in the state-by-state Electoral College vote that determines the winner, according to Edison Research. On Friday he took the lead in Pennsylvania, whose 20 electoral votes would put him over the 270 threshold needed to win.

In the early hours of Saturday, Biden's slim lead widened in Georgia, a typically Republican-leaning state, to put him ahead by 7,248 votes with the count 99% complete. A recount is likely in the state because of the close margin.

In Arizona, Biden's lead narrowed to 29,861 votes with 97% of the tally completed. Trump's campaign has been optimistic that Arizona will end up in the president's column.

With thousands of votes still to count, it was not clear when the contest would conclude, though further updates were expected on Saturday.

The country waited anxiously for resolution.

Biden backers danced in Philadelphia's streets, while armed Trump supporters in Phoenix and Detroit said the election was being stolen, despite no evidence of widespread irregularities. Under the banner of "Stop the Steal," Trump supporters planned dozens of rallies for Saturday.

Democrat Joe Biden said he was going to win the U.S. presidency as his lead grew over President Donald Trump in battleground states.
News
1 year ago

NO VICTORY SPEECH YET

Biden's speech was originally planned as a victory celebration, but he changed his approach in the absence of a call on the result from television networks and other election forecasters.

Trump has nothing on his public schedule for Saturday. He said in a statement issued by his campaign on Friday that "all legal ballots must be counted and all illegal ballots should not be counted," while accusing Democrats of resisting that call.

Election officials say there has been no evidence of fraud.

Although the popular vote does not determine the outcome, Biden leads Trump by 4.18 million votes nationwide out of a record 147 million cast. He said on Friday Americans had given him a mandate to tackle the pandemic, the struggling economy, climate change and systemic racism.

"They made it clear they want the country to come together, not continue to pull apart," said Biden, making his third bid for the White House in a political career spanning five decades.

Biden, who said he hoped to address Americans again on Saturday, said Trump's demands to stop the count would not work.

Trump gave no indication he was ready to give up.

A Trump adviser described the campaign's litigation strategy as chaotic and disorganized. Another Republican official said it was doubtful the lawsuits would yield a Trump victory.

"This race is over, and the only person who doesn't see it is Donald Trump," said the official, who spoke on condition of anonymity.

In one potential bright spot for Trump, U.S. Supreme Court Justice Samuel Alito ordered county election boards in Pennsylvania to follow a state directive to separate mail-in ballots received after 8 p.m. on Election Day from other ballots. However, Pennsylvania's chief elections official, Kathy Boockvar, has said late-arriving ballots are a tiny proportion of the overall vote in the state.

In a blow to the president, White House chief of staff Mark Meadows was diagnosed with Covid-19, according to a source familiar with the situation.

Meadows, who frequently appears at public events without a mask, is the latest person within Trump's circle to contract the virus, which has killed more than 236,000 people in the United States and is still sweeping the country. He has been a key adviser to Trump on policy as well as the election.

Democratic presidential candidate Joe Biden took the lead over President Donald Trump in the battleground states of Pennsylvania and Georgia for the ...
News
1 year ago
Next Article