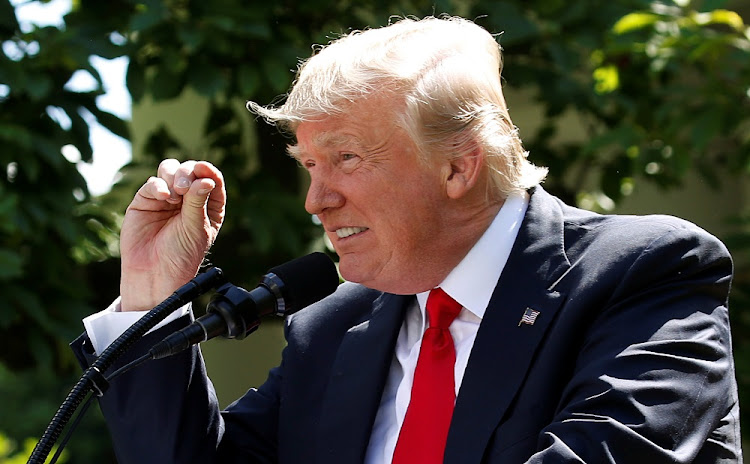 President Donald Trump refers to amounts of temperature change as he announces his decision that the United States will withdraw from the landmark Paris Climate Agreement, in the Rose Garden of the White House in Washington, US.
Image: REUTERS/Joshua Roberts/File Photo

But the outcome of the tight US election contest will determine for how long. Trump's Democratic rival, Joe Biden, has promised to rejoin the agreement if elected.

"The US withdrawal will leave a gap in our regime, and the global efforts to achieve the goals and ambitions of the Paris Agreement," said Patricia Espinosa, executive secretary of the UN Framework Convention on Climate Change (UNFCCC).

The United States still remains a party to the UNFCCC. Espinosa said the body will be "ready to assist the U.S. in any effort in order to rejoin the Paris Agreement."

Trump first announced his intention to withdraw the United States from the pact in June 2017, arguing it would undermine the US economy. The administration formally served notice of the withdrawal to the United Nations on Nov. 4, 2019, which took one year to take effect.

The departure makes the United States the only country of 197 signatories to have withdrawn from the agreement, hashed out in 2015.

Current and former climate diplomats said the task of curbing global warming to safe levels would be tougher without the financial and diplomatic might of the United States.

"This will be a lost opportunity for a collective global fight against climate change," said Tanguy Gahouma-Bekale, chair of the African Group of Negotiators in global climate talks.

A US exit would also create a "significant shortfall" in global climate finances, Gahouma-Bekale said, pointing to an Obama-era pledge to contribute $3 billion to a fund to help vulnerable countries tackle climate change, of which only $1 billion was delivered.

"The challenge to close the global ambition gap becomes much, much harder in the short term," said Thom Woodroofe, a former diplomat in UN climate talks, now a senior adviser at the Asia Society Policy Institute.

However, other major emitters have doubled down on climate action even without guarantees the U.S. will follow suit. China, Japan and South Korea have all pledged in recent weeks to become carbon neutral - a commitment already made by the European Union.

Those pledges will help drive the huge low-carbon investments needed to curb climate change. If the United States were to re-enter the Paris accord, it would give those efforts "a massive shot in the arm", Woodroofe said.

European and US investors with a collective $30 trillion in assets on Wednesday urged the country to quickly rejoin the Paris Agreement, and warned that the country risked falling behind in the global race to build a low-carbon economy.

Scientists say the world must cut emissions sharply this decade in order to avoid the most catastrophic effects of global warming.

Obama’s White House had pledged to cut US emissions 26-28% by 2025 from 2005 levels under the Paris deal. Biden is broadly expected to ramp up those goals if elected. He has promised to achieve net-zero emissions by 2050 under a sweeping $2 trillion plan to transform the economy.

The Rhodium Group said that in 2020, the United States will be at around 21% below 2005 levels. It added that under a second Trump administration, it expects US emissions would increase by more than 30% through 2035 from 2019 levels.