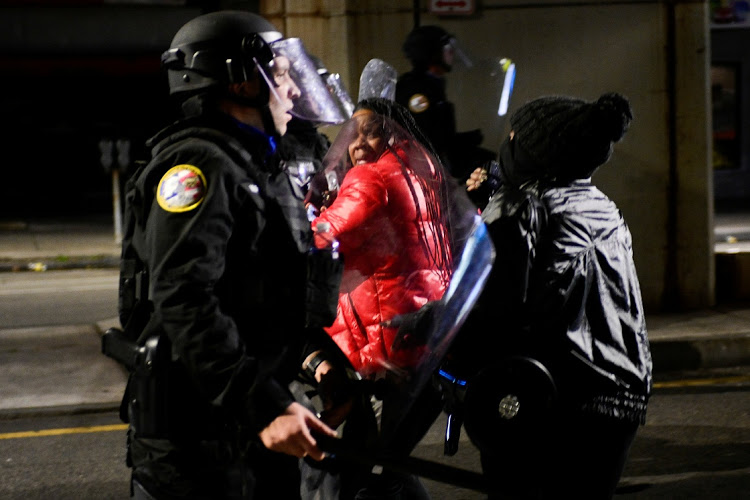 Demonstrators clash with riot police during a rally after the death of Walter Wallace Jr., a Black man who was shot by police in Philadelphia, Pennsylvania, U.S., October 27, 2020.
Image: REUTERS/Bastiaan Slabbers

New York police arrested about 30 people as hundreds of protesters took to the streets in Brooklyn late on Tuesday following a deadly police shooting in Philadelphia of a Black man armed with a knife.

"Approximately 30 people have been arrested", a New York Police Department spokesman told Reuters by phone, without detailing the reason for the arrests.

He added that one NYPD officer suffered "non-life threatening" injuries during the late night protests. Police also said that their vehicles were damaged and some trash cans were set on fire in the demonstrations.

NBC News reported that a car attempted to drive through a group of police officials in Brooklyn.

The development in New York City came after the deadly Philadelphia police shooting on Monday of Walter Wallace, 27, who was described by relatives as suffering from a mental breakdown as he was confronted by law enforcement.

The former Minneapolis police officer charged with murdering George Floyd, Derek Chauvin, has been released from a correctional facility after ...
News
1 year ago

It follows months of anti-racism protests that have spread across the United States since the death in May of George Floyd, an African-American who died after a Minneapolis police official knelt on his neck for nearly nine minutes.

The protests, which have sometimes turned violent, have aimed at achieving racial equality and opposing police brutality.

Philadelphia became the latest flash point in the United States on issues of race and police use of force, as Tuesday's rallies began peacefully but grew confrontational as darkness fell, just as on the previous day.

A bystander's video of the shooting of Wallace was posted on social media on Monday and showed him approaching two police officers who had drawn their guns and warned him to put down his knife. The officers were backing up before the camera cut briefly away as gunfire erupted and Wallace collapsed.

In societies built on segregation, integration is perceived by those with privilege and superiority as a threat to their stable, prosperous and ...
Opinion
1 year ago

The ANC has called on "all Americans and their government" to resolve the "racial impasse" in the wake of the death of George Floyd.
News
1 year ago

Naomi Osaka withdrew from the Western & Southern Open on Wednesday in protest against racial injustice hours after the two-times Grand Slam champion ...
Sport
1 year ago
Next Article