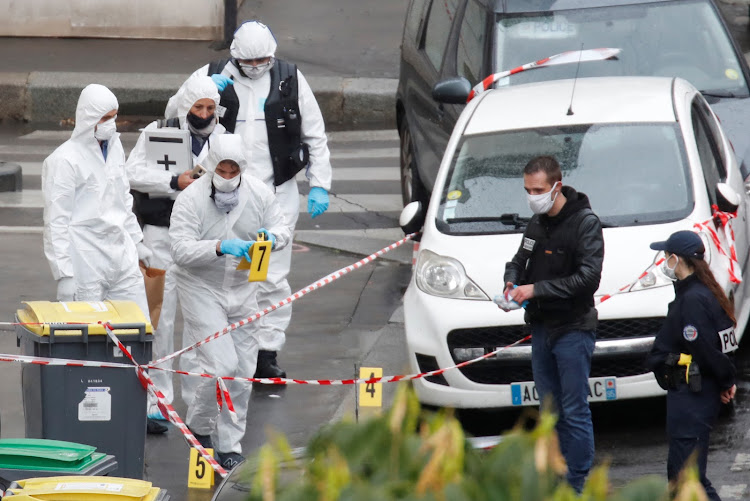 France has been shaken by the beheading of a history teacher by an Islamist radical, who had wanted to avenge the teacher's use of cartoons of the Prophet Mohammad in a class on freedom of expression. Turkish leader Tayyip Erdogan asked his compatriots to stop buying French goods on Monday in the latest expression of anger in the Muslim world over images being displayed in France of the Prophet Mohammad.
Image: REUTERS/Gonzalo Fuentes

PARIS/ANKARA - Turkish leader Tayyip Erdogan asked his compatriots to stop buying French goods on Monday in the latest expression of anger in the Muslim world over images being displayed in France of the Prophet Mohammad, which some Muslims consider blasphemous.

In Bangladesh on Monday, protesters unfurled placards with a caricature of French President Emmanuel Macron and the words: "Macron is the enemy of peace", while Pakistan summoned France's ambassador in Islamabad to issue a protest.

Erdogan, who has a history of fraught relations with Macron, said France was pursuing an anti-Islam agenda.

"I am calling to all my citizens from here to never help French brands or buy them," Erdogan said.

In Turkey, French autos are among the highest selling cars, and French-Turkish bilateral trade overall was worth nearly $15 billion last year. The Turkish president has made similar boycott calls in the past, including an appeal not to buy U.S. electronic goods in 2018 which was not followed through.

Erdogan on Monday joined a chorus of voices elsewhere calling for a boycott. In Kuwait city, a supermarket had stripped its shelves of L'Oreal cosmetics and skincare products after the cooperative union to which it belongs decided to stop stocking French goods.

In Saudi Arabia, calls for a boycott of French supermarket chain Carrefour were trending on social media, though two stores Reuters visited in the Saudi capital on Monday seemed as busy as normal.

While the immediate commercial impact of the boycott calls was difficult to assess, French businesses operate in majority-Muslim markets around the world.

Asked about the boycott calls, Geoffroy Roux de Bezieux, the head of the main French employers' federation, said on RMC radio station: "Of course it's bad news for the firms that have a presence there."

Earlier, Erdogan had questioned the state of Macron's mental health, prompting Paris to recall its ambassador in Ankara.

"What is the problem of this person called Macron with Muslims and Islam? Macron needs treatment on a mental level," Erdogan said in a speech on Saturday.

The row has its roots in a knife attack outside a French school on Oct. 16 in which an 18-year-old man of Chechen origin beheaded Samuel Paty, a 47-year-old teacher who had shown pupils cartoons of Mohammad in a civics lesson on freedom of speech.

The cartoons had initially appeared years ago in the satirical magazine Charlie Hebdo, whose Paris editorial office was attacked in 2015 by gunmen who killed 12 people.

Since the beheading, the caricatures were projected onto the facade of a building in one city and people displayed them at protests around the country. Macron said he would redouble efforts to stop conservative Islamic beliefs subverting French values.

Several of France's partners in the European Union rallied round on Monday.

"Full solidarity with the President @EmmanuelMacron" Conte wrote. "Personal invective does not help the positive agenda that the EU wants to pursue with Turkey."

France itself has stood firm. In a Tweet on Sunday, Macron said France respected all differences in a spirit of peace but he also said: "We will not give in, ever."

France's foreign ministry said in a statement issued at the weekend that the criticism of France was being driven by a radical minority and urged foreign governments to dissociate themselves from boycott calls.

French regional newspaper La Nouvelle Republique has received threats on social media after it published a caricature of the Prophet Mohammad on its ...
News
1 year ago

France has expelled a Bosnian family who had beaten and shaved the hair of an adolescent girl who wanted to marry a young Serbian man, the interior ...
News
1 year ago
Next Article