US president eager to get back on campaign trail 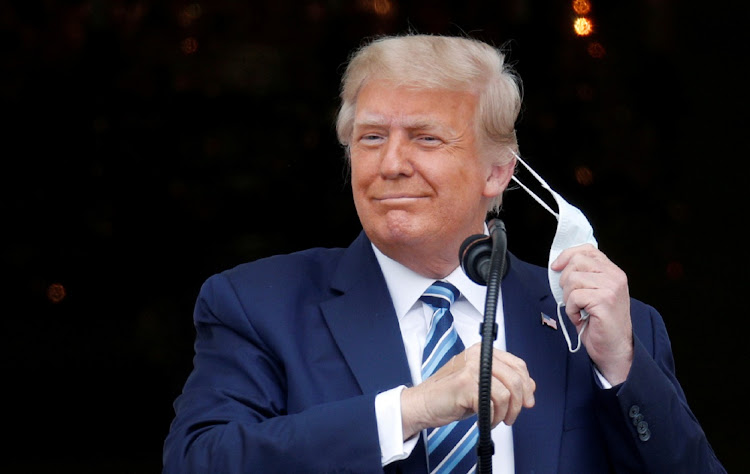 U.S. President Donald Trump, takes off his face mask as he comes out on a White House balcony to speak to supporters gathered on the South Lawn for a campaign rally that the White House is calling a "peaceful protest" in Washington, U.S., October 10, 2020.
Image: TOM BRENNER

Washington – Donald Trump is no longer a transmission risk for Covid-19, his doctor said at the weekend, as the US president seeks to put his bout with the coronavirus behind him and return to the campaign fray.

Trump, trailing his Democratic challenger Joe Biden in opinion polls, addressed supporters from a White House balcony at the weekend and urged a crowd of hundreds of largely black and Latino supporters to help him get the vote in the November 3 election.

His physician Sean Conley said in a statement that Trump had taken a test on Saturday showing he was no longer “a transmission risk to others” and there was no longer evidence “of actively replicating virus”.

The White House had no immediate comment on whether Conley's statement meant Trump had actually tested negative for the coronavirus.

Trump first revealed that he had tested positive on October 2, and spent three days in hospital. The White House has not disclosed when Trump last tested negative.

Trump is eager to get back on the campaign trail after an absence of more than a week. He plans to travel to the key battleground state of Florida today, followed by rallies in Pennsylvania and Iowa tomorrow  and Wednesday.

The president's illness has cast a spotlight on the pandemic, which has infected nearly 7.7-million people in the US and killed more than 213,000. His administration has faced criticism for its handling of the crisis, and for its lax approach to mask-wearing and social distancing in the White House. At least 11 close Trump aides have tested positive for the coronavirus.

Speaking firmly and with no sign of the raspy throat evident in recent interviews, Trump delivered a shorter than usual campaign speech.

He attacked Democrats, accusing them of pursuing a socialist or even communist agenda, and hailed his own record in fighting crime and boosting the US economy, while flag-waving supporters cheered and chanted “we love you”.

U.S. President Donald Trump, under coronavirus quarantine in the White House and restricted from traveling, is grasping for ways to put a spark back ...
News
11 months ago

Trump, standing alone at the event, was not wearing a mask as he spoke. In the crowd, most were wearing masks but not following social distancing guidelines.

Trump repeated past calls for states to reopen their economies even as new cases hit a two-month high on Friday.

Opinion polls show Biden with a substantial lead nationally, though with a narrower advantage in some of the states that may decide the election outcome. – Reuters