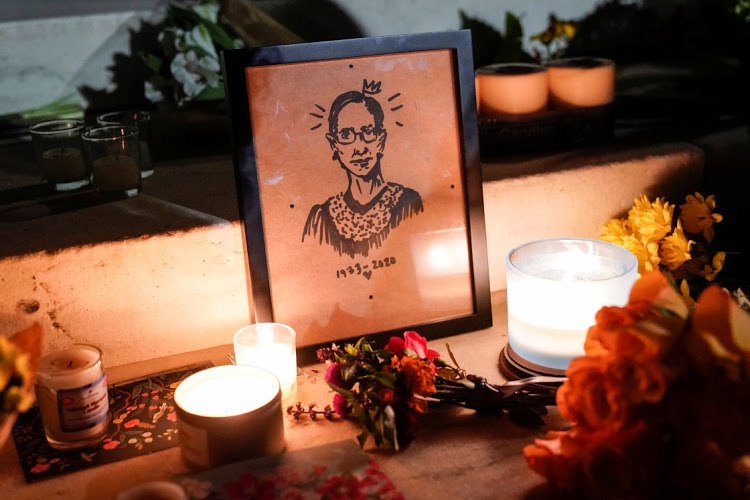 Candles are lit next an illustration of Associate Justice Ruth Bader Ginsburg as people mourn her death at the Supreme Court in Washington, U.S., September 19, 2020.
Image: REUTERS/Joshua Roberts

On a cool night in a heated political year in Washington, several hundred people clutching candles, flowers and signs quietly gathered on the steps of the U.S. Supreme Court to mark the death Friday of liberal icon Justice Ruth Bader Ginsburg.

A little before midnight, a woman sang the mourners' Kaddish, a traditional Jewish prayer for the dead, on the first night of Rosh Hashanah, the beginning of the Jewish New Year.

"It just feels so nice to be out here with other people who feel the same way," said Dominik Radawski, 46, standing on the steps that are often the site of boisterous shouting matches when the court hears arguments on sensitive cases. "There's no one here being angry. It's this sense of quiet contemplation, this sense of respect

A trailblazing women's rights lawyer before she joined the court in 1993, Ginsburg - popularly known by her initials RBG - emerged as an unlikely pop icon in recent years, her image emblazoned on coffee mugs, T-shirts and children's books.

"RBG inspired so many young women to follow their dreams and set their sights on things that so many people deemed impossible. And she made them possible," said Claire Shelby, 19. "I think that everyone out here tonight is here tonight to honor her memory and make sure she is not tarnished in history."

Another tribute played out in New York, where an image of Ginsburg and the alternating messages "thank you" and "rest in power" were projected on the front of the New York State Civil Supreme Court building in Manhattan.

The quiet belied the likely political fight coming. Republican U.S. Senate Majority Leader Mitch McConnell on Friday said the Senate would vote on any replacement nominated by President Donald Trump, who now has a chance to appoint a third justice to the court, giving it a 6-3 conservative majority.

"This is the question everyone's thinking about tonight," said David Hill, 60. "Will someone like her come through again?"