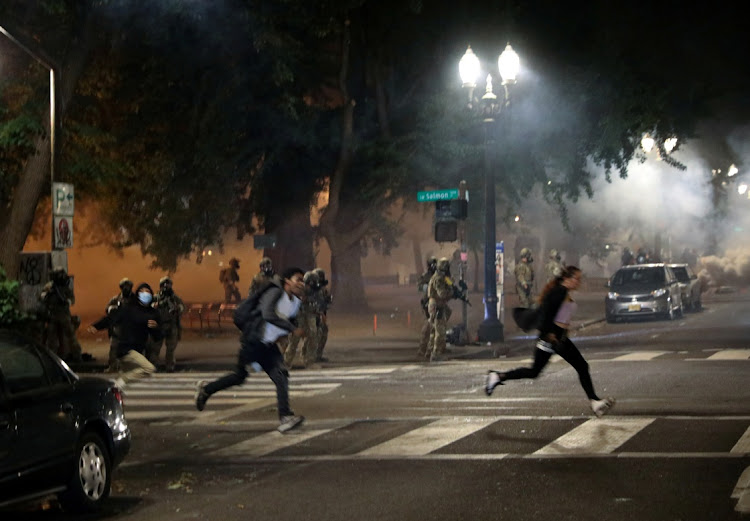 Troops fire teargas at demonstrators during a protest against racial inequality in Portland, Oregon in July.
Image: REUTERS/CAITLN OCHS

Portland Police made multiple arrests overnight on Friday as the Oregon city nears 100 days of demonstrations against racism and police brutality, which have at times turned violent.

"Yes, we have made multiple arrests tonight", a Portland Police spokesman told Reuters in an emailed statement after police had declared a gathering as "unlawful". The statement did not give a specific number.

"Officers will continue to make targeted arrests of those who fail to adhere to this order. The gathering at N Lombard St and N Campbell Ave has been declared an unlawful assembly", police said.

Police shot and killed a self-declared anti-fascist activist in Washington state on Thursday night as they moved in to arrest him on suspicion he fatally shot a right-wing counterprotester last weekend in Portland.

Demonstrations against racism and police brutality have swept the United States since the death in May of George Floyd, a 46-year-old Black man who died after a Minneapolis police officer knelt on his neck for nearly nine minutes.

Portland, in particular, has seen over three months of daily demonstrations calling for policing and social justice reforms. These have at times turned into clashes between demonstrators and officers, as well as between right- and left-wing groups.

The administration of U.S. President Donald Trump deployed federal forces to Portland in July to crack down on the protests. Trump signed a memo on Wednesday that threatens to cut federal funding to "lawless" cities, including Portland.

His Democratic challenger in the Nov. 3 presidential election, Joe Biden, has accused Trump of stoking violence with his rhetoric.

Players can stay in locker rooms during anthem: US women's league

The U.S. National Women's Soccer League (NWSL) has said players can choose to remain in the locker room or express their individual views on the ...
Sport
2 years ago
Next Article