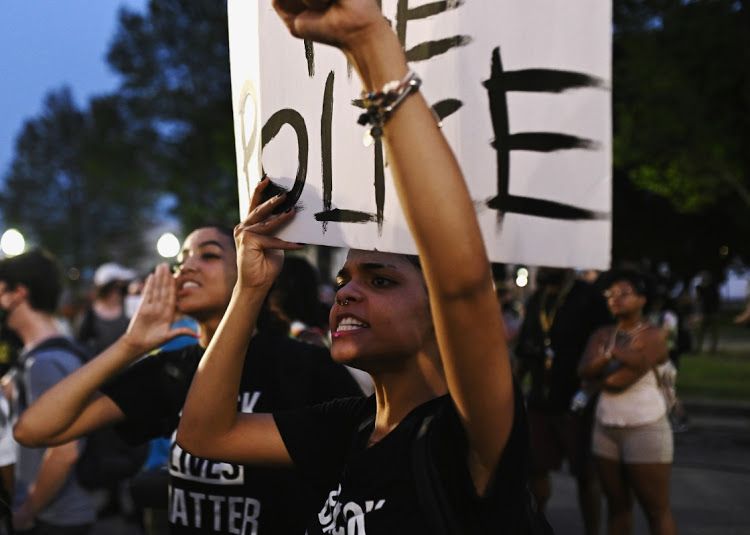 People yell at a line of police officers during a protest outside the Kenosha County Courthouse after a Black man, identified as Jacob Blake, was shot several times by police in Kenosha, Wisconsin, U.S.
Image: REUTERS/Stephen Maturen

Police firing tear gas clashed with protesters in a second night of unrest and arson in Kenosha, Wisconsin, triggered by the wounding of a Black man who was shot in the back by officers as his three young sons looked on.

Protesters defied a dusk-to-dawn curfew on Monday night as they confronted law enforcement officers in riot gear outside the county courthouse blocks away from where Jacob Blake was gunned down on Sunday in an encounter with police caught on video.

Blake, 29, survived the shooting and was listed in stable condition following surgery, his father told news media on Monday.

But the incident, the latest in a litany of cases to focus attention on police treatment of African Americans, unleashed outrage in the lakefront city of Kenosha about 40 miles (65 km) south of Milwaukee.

The shooting occurred three months after the May 25 death of a Black man in Minneapolis, George Floyd, who was pinned to the street under the knee of a white police officer, sparking nationwide protests against police brutality and racism within the U.S. criminal justice system.

Protests erupted in Kenosha in the US state of Wisconsin after police shot an apparently unarmed Black man multiple times in the back, according to ...
News
1 year ago

Black Lives Matter activists demanded the immediate arrest of the officers involved in the shooting, who were placed on administrative leave.

The upheaval prompted Governor Tony Evers to order National Guard troops deployed to the city to help maintain order. But he also condemned the "excessive use of force" in the Blake shooting and called for a special legislative session next week to consider police reforms.

Despite the curfew, scores of protesters marched through the streets Monday night and into Tuesday morning. One large group skirmished in front of the courthouse with sheriff's deputies seen firing tear gas and pepper balls into the crowd. Demonstrators hurled water bottles and firecrackers at the police.

Several commercial and government buildings were set ablaze, along with vehicles in at least two car dealership lots, but the disturbances seemed to be winding down by early morning.

Police used tear gas, rubber bullets and smoke bombs to disperse the crowd, according to protester Porche Bennett, 31, of Kenosha.

"It's people from out of town doing this. We've been shopping there since we were kids and they set it on fire," Bennett said, adding that the instigators she saw were white.

But after the calm settled in, police and demonstrators worked together to sweep up debris such as broken glass, water bottles and rubber bullets, Bennett said.

"It was both peaceful and crazy," she said.

On Monday afternoon, Kenosha Mayor John Antaramian faced dozens of angry, jeering protesters, some of whom tried to force their way into the city's public-safety building adjacent to the courthouse when the mayor retreated from the crowd.

The door was broken from its hinges, but police in riot gear drove the demonstrators back with pepper spray.

Before he was shouted down, Antaramian had vowed that "justice is done for everyone" and that all of those involved were entitled to "due process".

Video of the shooting taken by an onlooker showed Blake walking toward the driver's side of a gray SUV followed by two officers with their guns drawn at his back. Seven gunshots are then heard as Blake, who appears unarmed, opens the car door, one officer tugging at his shirt.

It was not known whether the officers saw something inside the vehicle that prompted them to shoot.

His three young sons witnessed the shooting from inside the car, according to the family attorney, Ben Crump.

Strict enforcement of South Africa's coronavirus lockdown by police and the army has placed the spotlight on official brutality, a cause of anger ...
News
1 year ago
Next Article