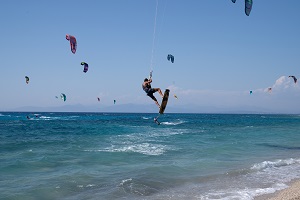 People kite surf at Mylos beach, following the easing of measures against the spread of the coronavirus disease (Covid-19), on the island of Lefkada, Greece. File photo
Image: REUTERS/Dimitris Rapakousis

Greece will extend restrictions in the popular holiday island of Mykonos and the coastal area of Chalkidiki in northern Greece to contain the spread of Covid-19 infections, Civil Protection authorities said on Wednesday.

The measures include a complete ban on live parties and festivities, a limit of nine people in all public and private gatherings and compulsory mask wearing in closed and open spaces.

No more than four people can be seated at the same table in restaurants unless they are very close relatives, in which case the limit is increased to six people.

The restrictions will go into effect from August 21 to 31.

The Namibian government is warning its citizens not to trust claims on social media that elephant dung can cure Covid-19, as coronavirus infections ...
News
1 year ago

On Tuesday Greece recorded 269 Covid-19 infections, its highest daily tally since its first case was detected on Feb. 26.

The government has been rolling out restrictions to fight the recent spike in coronavirus infections, limiting public gatherings, shutting down bars and restaurants from midnight and urging young people to wear masks as they return from holidays.

On Tuesday, Deputy Civil Protection Minister Nikos Hardalias told reporters that despite rising infections, Greece continued to be in a "better situation" compared with other European countries.

Greece, he said, ranked 180th in terms of deaths per million inhabitants, noting that 83% of recent infections were due to domestic dispersion of the virus as people did not observe proper social distancing.

At Mykonos, with a reputation as a party island that never sleeps, congested beach parties during the peak summer season have led authorities to clamp down.

Based on the latest data up to Tuesday, Greece has recorded a total of 7,472 Covid-19 infections and 232 deaths.