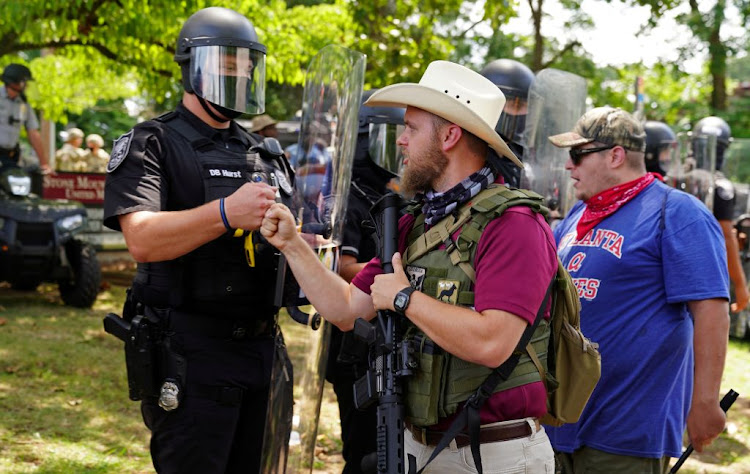 Groups ranging from an anti-government patriot group in Portland, Oregon, to alt-right Proud Boys in Kalamazoo, Michigan, battled anti-fascists and Black Lives Matter activists as months of anti-racism protests increasingly pitted Americans against one another.

Several dozen demonstrators, many armed and carrying Confederate battle flags, staged a rally in the Atlanta suburb of Stone Mountain next to a park famed for its giant monument to leaders of the breakaway slave-holding states.

A mix of militia members, Confederate followers and supporters of President Donald Trump faced off against more than a hundred left-wing protesters, some armed, many carrying signs or wearing T-shirts supporting Black Lives Matter.

After hours of shouting, and the burning of a Confederate flag, the protest devolved into scuffles and fist fights, drawing in police backed by a SWAT team.

One person was killed when several shots were fired amid a Black Lives Protest in downtown Austin, Texas, on Saturday, authorities said.
News
1 year ago

In Kalamazoo, the all-male Proud Boys group staged a rally in support of police, clashing with members of the anti-fascist Michigan People's Defense League and other counter protesters, leading to several arrests, according to a statement by the city's Department of Public Safety.

Several dozen right-wing demonstrators, some of them armed, also gathered in Portland on Saturday to oppose anti-fascists and back police after 80 days of protests against racism and police violence in the Oregon capital, local television station Koin 6 News reported.

Scuffles broke out between the Portland-based Patriot Prayer members and Black Lives Matter activists, with a Koin 6 photographer tweeting that he heard gunshots.

Portland Police did not immediately respond to a request for comment.

A pattern among the clashes was rising tensions between right and left-wing groups after nearly three months of protests over the death of George Floyd in Minneapolis police custody and President Donald Trump's “law and order” response to demonstrations.