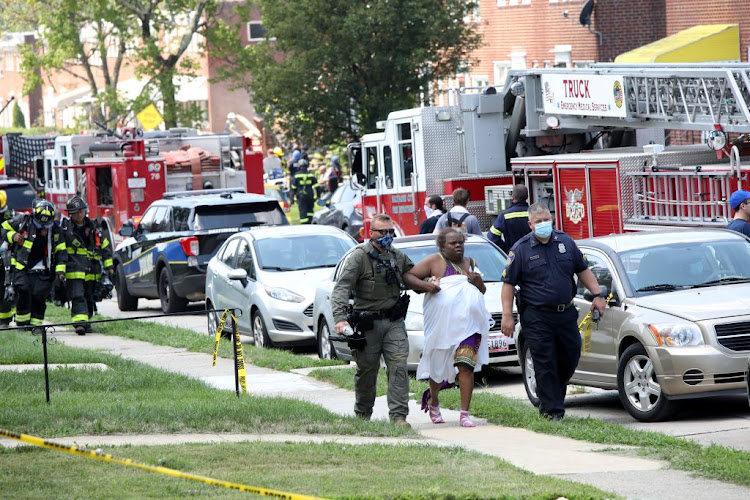 Police officers help a woman at the scene of an explosion in a residential area of Baltimore, Maryland, US, on August 10 2020.
Image: REUTERS/Rosem Morton

A major gas explosion levelled three houses as it tore through a Baltimore neighbourhood on Monday, killing at least one person and critically injuring three while at least five others including children were trapped, firefighters and media said.

The Baltimore Sun reported it was a natural gas explosion, citing fire officials, but said the exact cause remained unknown.

Photos from the scene showed a section of brick row houses destroyed with rubble strewn about as rescue workers climbed over a pile of debris, searching for victims.

One woman was killed, the Baltimore City Fire Department said on Twitter.

Four others were rescued, all in serious or critical condition, the Baltimore Firefighters IAFF Local 734 said on Twitter.

At least five people were trapped, some of them children, and rescuers were communicating with one person still trapped, the union said.

Later it tweeted that a man was freed from the rubble.

“He is being transported by #BCFDEMS to the hospital in serious condition. Rescuers continue to search the debris for other survivors,” the union said.

Officials from Baltimore Gas and Electric Co were working to turn off gas to the area, the Baltimore Sun reported.

“Once the gas is off, we can begin to safely assess the situation,” gas company spokesperson Richard Yost told the Sun.

One neighbour who happens to be a building inspector told the Sun he could hear shouts from trapped children.

“Come get us! We're stuck!” came the cries, Kevin Matthews, a US Occupational Safety and Health Administration building inspector who lives on the block, told the Sun.

Matthews found one person buried from the neck down and another sheltering in a closet, the Sun said.

People felt the blast miles away and neighbours said their windows were blown out and doors blasted off the hinges, the Sun reported.

Lebanese protesters hurled rocks at security forces blocking a road near parliament on Sunday in a second day of anti-government demonstrations after ...
News
1 year ago

Countries and international organisations are sending help to Lebanon after a massive explosion in Beirut killed at least 158 people and injured ...
News
1 year ago
Next Article