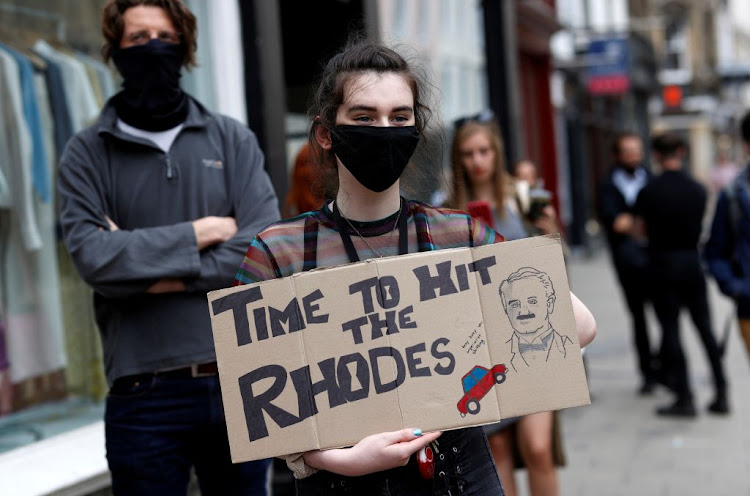 A demonstrator is seen with a placard during a protest for the removal of the statue of British imperialist Cecil John Rhodes on the outside of Oriel College in Oxford, Britain, on June 9 2020.
Image: REUTERS/Eddie Keogh

Energised by the toppling of a monument to a slave trader in the English city of Bristol, protesters demanded on Tuesday the removal of a statue of 19th century British colonialist Cecil John Rhodes from a college at Oxford University.

A wave of antiracism protests sweeping across the US and Europe has reignited a debate about monuments glorifying Britain's imperialist past, which many people see as offensive in today's multi-ethnic society.

A previous student campaign in Oxford in 2015, modelled on the “Rhodes Must Fall” movement in SA that led Cape Town University to remove its statue of Rhodes that year, failed to convince Oxford's Oriel College to follow suit.

Many academics and public figures oppose the removal of such statues, arguing they merely reflect history and should be used as points of discussion.

But dramatic images on Sunday of protesters in the port city of Bristol tearing down a statue of 17th century slave trader Edward Colston and throwing it into the harbour inspired campaigners in Oxford to redouble their efforts with a protest march on Tuesday.

“This is a symbolic moment where ... peace-loving and democracy-loving communities around the world are saying 'we have had enough,'" said Laura Stewart, a PhD student at Oxford and Rhodes Must Fall activist. 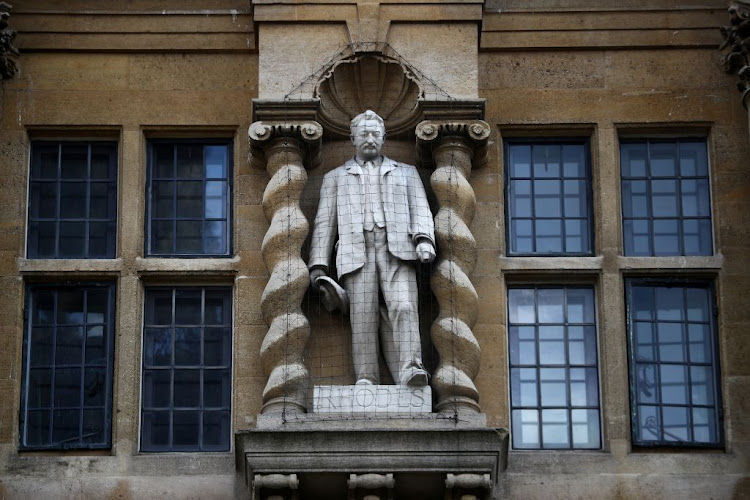 A statue of British colonialist Cecil John Rhodes is seen on the side of Oriel College in Oxford, Britain, on June 9 2020.
Image: REUTERS/Hannah McKay

A mining magnate, Rhodes was a central figure in Britain's colonial project in Southern Africa, giving his name to Rhodesia, present-day Zimbabwe, and founding the De Beers diamond empire.

The student campaigners say it is wrong to honour a man who made his fortune from the exploitation of African miners, secured power through bloody imperial wars and paved the way to apartheid with his beliefs and measures on racial segregation.

A student at Oriel in his youth, Rhodes left the college money when he died and also endowed the Rhodes Scholarships, which have allowed more than 8,000 students from countries around the world to study at Oxford over the past century.

His statue stands in a niche high up on the facade of one of Oriel's buildings, whose construction was partly funded by him.

In a statement ahead of Tuesday's demonstration, the college said it abhorred racism.

“We understand that we are, and we want to be, a part of the public conversation about the relationship between the study of history, public commemoration, social justice and educational equality,” it said.

“As a college, we continue to debate and discuss the issues raised by the presence on our site of examples of contested heritage relating to Cecil Rhodes.”

Rhodes University is one of the institutions that have been at the centre of the transformation debate. This was evident in 2017 when after 115 years ...
News
1 year ago
Next Article