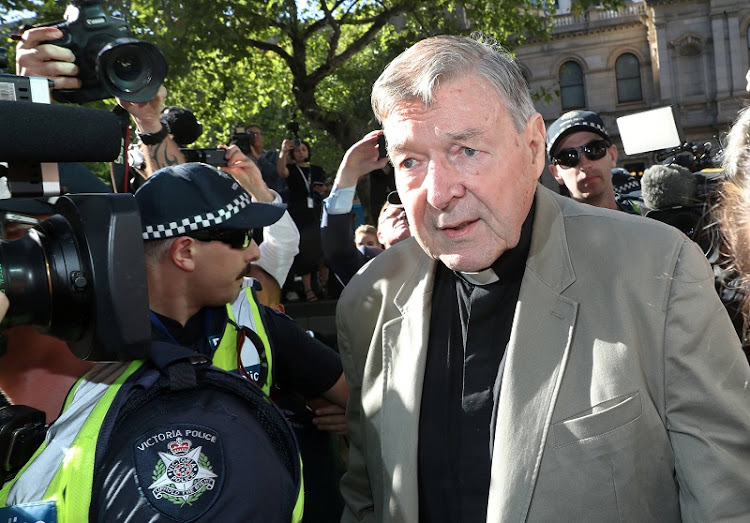 An Australian government-appointed inquiry into child sex abuse in the Catholic Church and other institutions found former Vatican treasurer Cardinal George Pell was aware of child sex abuse by at least two priests in the 1970's and 1980s and failed to take steps to get the priests removed.

Previously redacted sections of the Royal Commission's report, first issued in late 2017, were released on Thursday following Pell's acquittal last month on five counts of sexually assaulting two teenaged choirboys in the 1990s when he was archbishop of Melbourne.

The report from the Royal Commission into Institutional Responses to Child Sexual Abuse said Pell was aware of child sexual abuse in the church by the 1970s.

"We are also satisfied that by 1973 Cardinal Pell was not only conscious of child sexual abuse by clergy but that he also had considered measures of avoiding situations which might provoke gossip about it," said the Commission, the country's most powerful public inquiry forum.

Suffering should be embraced and redeemed through service even when a result of a miscarriage of justice, Australia's Cardinal George Pell, who spent ...
News
1 year ago

The Commission did not look into specific abuse allegations against Pell, but focused on whether he and other church leaders in Australia were aware of thousands of incidents of abuse dating from the 1970s and what they did to address those issues over the next three decades.

During that period, Pell rose from being a priest in regional Australia to become archbishop of Melbourne, then archbishop of Sydney.

The former Vatican treasurer was the most senior Catholic cleric worldwide to be jailed for child sex abuse. He was freed in April after just over a year in prison, when the High Court of Australia overturned his conviction on the grounds there was not enough evidence beyond a reasonable doubt.

The Commission found Pell was aware of allegations of child abuse by two priests, Father Peter Searson and Father Wilfred Baker, and should have pushed for their removal. It also rejected Pell's evidence that he was unaware of why Gerard Ridsdale, another offending priest, was being moved from one parish to another during the 1970s and 1980s.

Pell, who is now living in Sydney, did not immediately respond to a request for comment through his spokeswoman. He has previously denied allegations he was aware of sexual abuse in the church and failed to act.

The Catholic Church in Australia declined to comment and referred to statements from the archbishop of Melbourne and from Bishop Paul Bird of Ballarat, where Pell was an assistant priest from 1973 to 1984. The bishop said the diocese would considering the findings released on Thursday.

"I acknowledge the past failings in governance in the Diocese that allowed terrible abuse of so many children who were entitled to feel safe in their interactions with the church," he said in a statement.

The Royal Commission's five-year investigation was one of the world's biggest inquiries into child abuse and found several institutions, including the Catholic Church, had repeatedly failed to keep children safe with cultures of secrecy and cover-ups.

The long awaited findings on Pell will now be studied by Victoria Police to assess whether any further investigations into abuse within the church are warranted. "At this time it would not be appropriate to comment further about any possible action," a police spokeswoman said in an emailed comment.

Baker, who was sentenced in 1999 to four years' jail for child sex offences, was allowed to serve as a priest until 1997, even though there were complaints about him for years. He died in 2014.

Searson, who died in 2009, had faced a range of allegations of physical and sexual abuse over decades but was never charged with child sexual abuse.

The commission said Pell should have asked questions about why Ridsdale was being moved, given that he knew as early as 1973 that Ridsdale's actions, such as taking groups of boys away on overnight trips, were a risk.

Ridsdale, in jail since 1994, has been convicted on more than 130 charges of sexually abusing children over nearly three decades. His lawyer declined to comment as Ridsdale is awaiting sentencing next week on further abuse charges.

The commission did not hold Pell responsible for not pushing harder for investigations into two Christian Brothers, a religious community within the Catholic church, who were alleged to have abused children during Pell's time as an assistant priest in the town of Ballarat.

"Father Pell said he had no jurisdiction 'in any sense' over the Christian Brothers. It was not unreasonable for Father Pell, as a diocesan priest, to believe it was not for him to raise the conduct of Brother Fitzgerald with the provincial," the commission said.

The commission's findings were held back by the government to avoid prejudicing Pell's two-year long court proceedings on allegations of abusing two boys at Melbourne's St Patrick's Cathedral was completed.