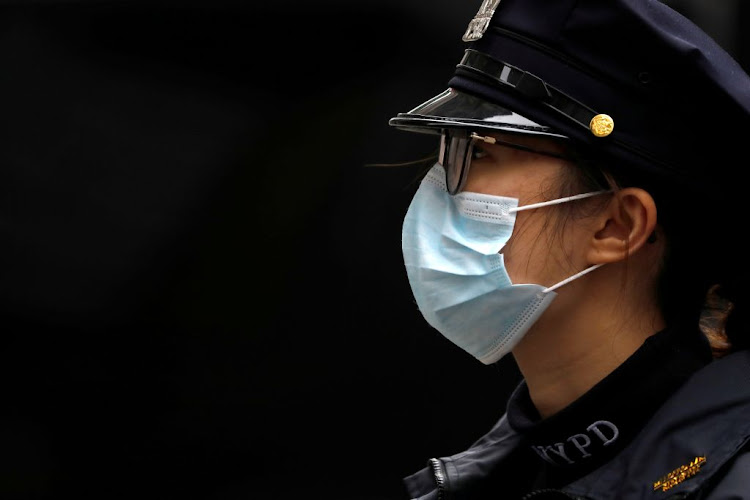 A member of the New York Police Department works during the outbreak of Covid-19 in Manhattan, US, on March 30 2020.
Image: REUTERS/Andrew Kelly

Two of the principal US coronavirus hot spots - New York and Louisiana - reported their biggest jumps in Covid-19 deaths yet on Friday, as the White House sent mixed messages on whether Americans should cover their face if they venture outdoors.

Surging deaths in New York City and New Orleans showed that a wave of lethal coronavirus infections expected to overwhelm hospitals, even in relatively affluent, urban areas with extensive health care systems, has begun to crash down on the United States.

Governors, mayors and physicians have voiced alarm for weeks over crippling scarcities of personal protective gear for first-responders and front-line health care workers, as well as ventilators and other medical supplies.

With the federal government's national strategic stockpile of such equipment nearly depleted, states have been forced essentially to compete against each other on the open market for vital resources.

Cities across the country have also scrambled to expand hospital capacity and recruit health-care professionals out of retirement to meet looming shortages of sick beds and personnel.

New York City, the pandemic's US epicentre, has mere days to prepare for the worst of the outbreak, said Mayor Bill de Blasio, whose city has suffered more than a quarter of the 7,000-plus coronavirus deaths to date nationwide.

New York is in an "extraordinary race against time," de Blasio told a news briefing on Friday, renewing his call for the federal government to mobilize the US military.

"We're dealing with an enemy that is killing thousands of Americans, and a lot of people are dying who don’t need to die," he said. "You can’t say, every state for themselves, every city for themselves. That is not America."

Americans, almost all of them under orders to stay home except for essential outings such as grocery shopping or seeing a doctor, have heard conflicting guidance in recent days about the need for wearing face masks in public.

At the White House on Friday, President Donald Trump seemed to muddy the waters further when he announced that federal health authorities are now recommending individuals wear cloth face coverings to stem transmission of the virus. But he stressed the advisory was purely voluntary, and that he would not be heeding the recommendation himself.

"With the masks, it's going to be a really voluntary thing. You can do it, you don't have to do it. I'm choosing not to do it," he said.

Can SA's decades-old vaccine regime work in our favour against Covid-19?

It’s too soon to say for sure, but a new study by scientists at the New York Institute of Technology (NYIT) could indicate a major score for SA in ...
News
2 years ago

Doctors and nurses, many lacking adequate supplies of medical-grade face masks and other protective gear, were already confronting an onslaught from Covid-19, the respiratory illness caused by the highly contagious coronavirus.

One physician at a New York City hospital recounted arriving at work on Friday to learn that three of his Covid-19 patients had died that morning. A few hours later, he had intubated two others.

"I've never seen anything like this. I've never even heard of something like this in the developed world," he told Reuters on condition of anonymity, because he was not authorised to speak with the media.

Another hot spot, Louisiana, reported a sharp jump in deaths, climbing 20% to 370 on Friday, marking the highest day-to-day increase in fatal cases yet for the Gulf Coast state.

Louisiana Governor John Bel Edwards pleaded for residents to abide by his state-at-home order as the number of infections statewide surpassed 10,000.

"For those of you who are not taking the crisis seriously, I am asking you to do a better job," he told a news conference.

Louisiana's largest city, New Orleans, where Mardi Gras celebrations in late February are believed to have spread the virus before social distancing orders were imposed, has become a focal point of the crisis.

Peter Kerpen tested positive for the virus but was discharged from Montefiore Hospital after making a full recovery on Tuesday.
News
2 years ago

The outbreak there has proven far more lethal than elsewhere in the US, with a per-capita death rate twice that of New York City. Doctors, public health officials and available data suggest the Big Easy's high levels of obesity and related ailments may be part of the problem.

In New York, the US state hardest hit by the coronavirus in sheer numbers of infections and lives lost, the cumulative number of fatalities rose above 2,900 - on par with the death toll from the September 11, 2001, attacks on the US.

"Personally, it's hard to go through this all day, and then it's hard to stay up all night watching those numbers come in," Governor Andrew Cuomo said.

New York City alone accounted for more than a quarter of the 7,077 US coronavirus deaths tallied by Johns Hopkins University on Friday. Known US infections, approaching 275,000 cases, made up about 25% of the more than 1-million cases reported worldwide.

Many of the most gravely ill patients were dying alone as medical staff forbade relatives to be with them in their final hours for fear of a further spread of infection.

"In those same tents, I saw too much pain, loneliness, and death. People dying alone," he wrote on Twitter on Thursday night.

In New Jersey, Governor Phil Murphy ordered all flags lowered to half-staff for as long as the emergency lasts, saying his state was the first to take such a measure.

Fresh data on Friday highlighted the economic consequences of the public health crisis, confirming that hundreds of thousands of Americans had lost their jobs due to the pandemic. Economists said actual job losses will prove far greater but had yet to be reflected in employment figures as much of the economy had only begun to shut down last month.