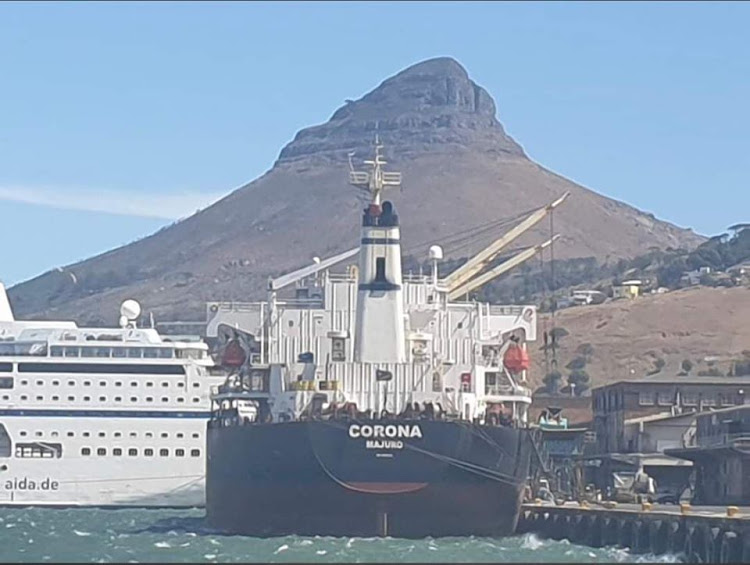 The cargo ship MV Corona is under quarantine in Cape Town harbour because of a coronavirus scare.

The general cargo carrier has featured prominently on social media in recent weeks due to its unfortunate name.

Now the joke has turned into reality, with two crew members in isolation - and one of them showing symptoms of Covid-19.

“The two crew members flew into the country from Istanbul, Turkey, on March 9. Only one of the two is showing signs of being ill. However, both have been placed into isolation on board the MV Corona,” said Transnet in a statement on Tuesday.

President Cyril Ramaphosa declared a state of disaster at the Union Buildings in Pretoria on March 15 2020. This comes after the number of confirmed ...
News
2 years ago

The ship, which left Cape Town harbour on March 11, sent a mayday signal to SA’s maritime rescue co-ordination centre, requesting it be allowed to return to Cape Town so that the crew member could be evacuated.

“Upon arrival on Monday March 16, the vessel waited off port limits. The co-ordination centre, port health and the harbour master of the port of Cape Town have co-ordinated efforts to evacuate both crew members by arranging with air force helicopters for the suspected crew member to be transported to hospital,” said Transnet.

Earlier this month, WhatsApp groups were crackling with jokes about the ill-fated cargo vessel.

A post in the Cape Town Boating group poked fun at its possible cargo: "Looks like she docked yesterday - full of beer I hope! Sorry guys but it is a unique opportunity for a smile in trying times!"

A University of Cape Town staff member has tested positive for the Covid-19 virus, the institution has announced
News
2 years ago

A 23-year-old Kenyan man has been arrested and charged with publishing false information with the intent to cause panic, after allegedly spreading ...
News
2 years ago
Next Article