More quakes could hit California as residents mop up 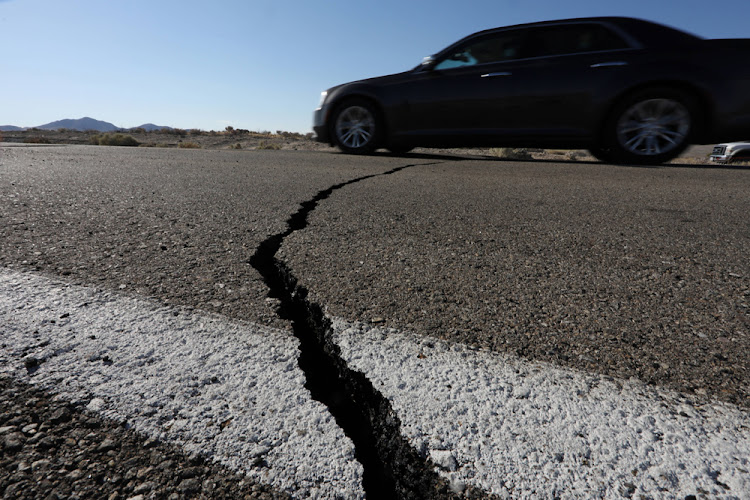 Earthquake A car passes over a fissure that opened on a highway during a powerful earthquake that struck Southern California, near the city of Ridgecrest, California, U.S.
Image: REUTERS/David McNew

Residents were assessing the damage and cleaning up the mess on Friday left by the strongest earthquake to hit Southern California in 25 years, with quaking felt by more than 20 million people from Los Angeles to Las Vegas.

And it was likely not to be over. More temblors, big ones, could be in store in the days ahead, seismologists said.

In the small desert city of Ridgecrest near the epicenter of the 6.4 magnitude earthquake, grocery store aisles were littered with smashed bottles, jars and packages.

"I mopped up over 20 gallons (75 liters) of wine that fell over in addition to the beer, soda and the cooler that fell over. We have several thousand dollars worth of damage," said shopkeeper James Wilhorn.

Only a few injuries were reported, but two houses caught fire from broken gas pipes, officials said. Water gushed up from zigzagged cracks in the pavement from busted water lines. Deep fissures snaked across the Mojave Desert, with passersby stopping to take selfies while standing in the rendered earth.

U.S. Geological Survey (USGS) seismologist Lucy Jones said more than 80 aftershocks had hit the area in the hours since the initial quake.

"We should be expecting lots of aftershocks and some of them will be bigger than the 3s we've been having so far," Jones told a news conference. "I think the chance of having a magnitude 5...is probably greater than 50-50," she said.

The quake hit the edge of Death Valley National Park about 113 miles northeast of Los Angeles at about 10:30 a.m. on Thursday. It was very shallow, only 6.7 miles (10.7 km) deep, amplifying its effect, and was felt in an area inhabited by 20 million people, the European quake agency EMSC said.

The Ridgecrest Regional Hospital, where 15 patients were evacuated earlier, appeared intact apart from some new cracks in the walls.

California Governor Gavin Newsom approved an emergency proclamation, and Ridgecrest Mayor Peggy Breeden said she had declared a state of emergency, a step that enables the town to receive help from outside agencies.

Mayor Breeden said she has asked residents to check on their neighbors in the high desert town.

"We're a close-knit community and everybody is working to take care of each other," she told Reuters by telephone.

The quake is the largest in Southern California since the 1994 magnitude 6.6 Northridge earthquake, USGS geophysicist Paul Caruso said. That quake, which was centered in a heavily populated area of Los Angeles, killed 57 people and caused billions of dollars of damage.