WATCH | Snake rescued from shirt of sleeping man in hospital

Image: 123rd A snake was pulled out of robes of a patient who was sleeping in hospital. 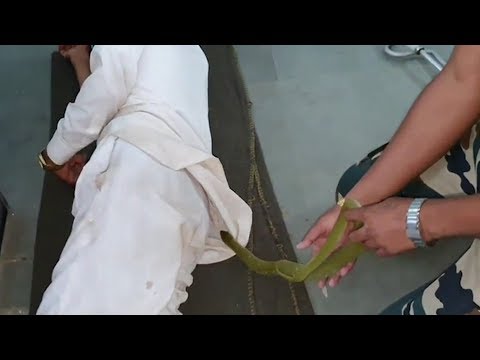 A snake was rescued from inside the shirt of a man sleeping in a hospital in India.

Snake catchers were called after a snake was seen in the man's clothing in the intensive care unit of Maharashtra Ahmednagar district hospital.

The elderly man was not a patient, but the companion of someone who was.

When hospital night staff noticed the snake they were shocked, but did not wake the man for fear of disturbing the snake.

Snake rescuer Akash Jadhav removed the unwanted guest, all without its host waking up. The snake-catching team said the reptile was venomous and the man was lucky it had not bitten him.

After the rescue the man was informed of the incident, which happened on June 15.