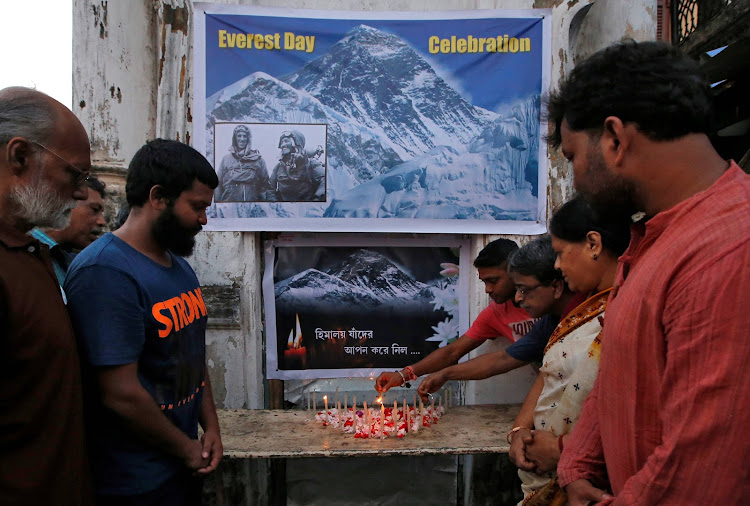 People light candles during a prayer service for those who died on Mount Everest during expeditions as they celebrate Everest Day in Kolkata, India
Image: REUTERS/Rupak De Chowdhuri

Nine people have died on the Nepalese side of Mount Everest so far this year, the most during a climbing season on the peak since a deadly earthquake in 2015.

This time however, climbers and guides are blaming a host of other factors for the spike in deaths:

Climbers blame delays for a spate of deaths on Mount Everest pic.twitter.com/Nv9rgbXZIw

This year, the Nepalese government issued a record 381 permits to climb Everest, costing $11,000 each.

Climbers spoke of traffic jams below the summit, in the "death zone" above 8,000 metres where many deaths occur due to the lack of oxygen.

Some operators have urged the government to cut the number of permits, and raise the price to around $20,000 to combat increased crowds.

"Confident climbers with experienced guides and sherpas would have known about the jam and waited for their chance to go up safely," said Adrian Ballinger of the U.S.-based company Alpenglow Expeditions.

In the "fleeting moment" she finally summited Everest, Saray Khumalo felt cold, struggled to think, but also knew she was "on top of the world and ...
News
3 years ago

The number of inexperienced climbers have risen. There is no requirement from the Nepalese government to take an aptitude test or to climb smaller peaks before acquiring an Everest permit. This has led to accidental deaths that are usually avoided by experienced climbers, guides said.

"They got into a situation that was beyond their ability," said Garrett Madison, from US-based Madison Mountaineering, on the experience level of some of those that died.

Nims Purja, who captured a photo of the long line of climbers on their way to the summit of Mount Everest, acknowledges overcrowding on the mountain, but tells @jamesaalongman that "knowing your body at certain altitudes and how it reacts" is key. https://t.co/VVdkcoTpQo pic.twitter.com/By8fqDrwZB

Some trekking companies perform health checks on prospective clients before beginning expeditions, but there is no mandatory requirement to do so.

"Some agencies are more driven by their business and don't give emphasis on climbers' fitness and don't ensure that only experienced climbers and sherpas are sent to the mountain," said Ang Tshering Sherpa, founder of Asian Trekking.

The rise of "low-cost" domestic firms, that in some cases offer expeditions at less than $35,000, half the price of more established rivals, creates incentives for cost-cutting, climbers said.

"They offer inadequate food and stay options which can be harmful," said Malay Mukherjee, an Indian climber, of some budget firms. "And the most dangerous, in a bid to save costs, they pass off cooks as experienced sherpas."

Heavy winds made climbing impossible on many days in May, traditionally the best month to climb Everest. That led to a small window of only a few days where climbers could safely ascend, adding to the overcrowding.

"This time there was no strict monitoring or coordination among expeditions in preparing schedules for the summit," Sherpa said. "This led everybody to rush as soon as there was good weather, crowding the route on the same day."