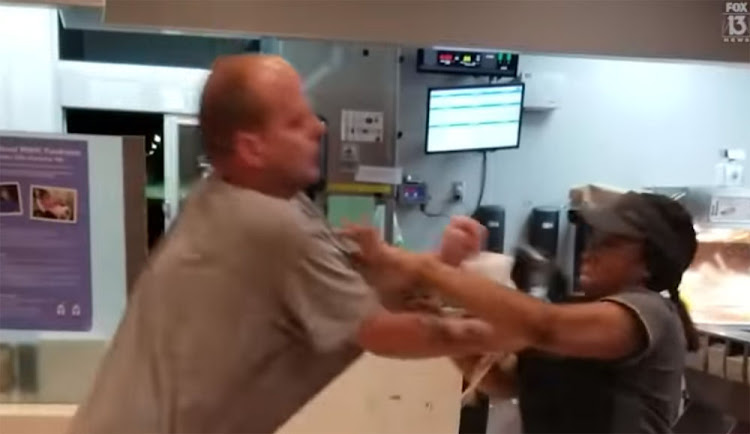 A video of a man attacking a McDonald's employee over plastic straws has gone viral.

According to CNN, a Florida man, Daniel Taylor, became upset when he could not find plastic straws in the fast food chain outlet.

The video shows Taylor reaching for the female employee behind the counter and grabbing her. The employee, Yasmine James, fought back by repeatedly punching Taylor as the other employees tried to separate them.

He was arrested on multiple charges of simple battery by the St Petersburg police. The Florida city introduced an ordinance effective as of January 1 to regulate the use of plastic straws.

According to the the new rule, customers are only given straws on request and the establishment can give customers any kind of straw as an alternative to a plastic straw.

The video sparked responses on Twitter with some demanding that McDonald's act on the issue.

@McDonalds #JusticeForYasmineJames
We need to hear how you have treated Yasmin James. Please let us know that you have assisted her w the assault that she endured while working for you. That you have respected her and compensated her for the trauma.

I just heard @McDonalds fired #YasmineJames for defending herself from an attack in St Pete’s Florida! Is this true? Are yall insane? @Wendys yall should hire her and make her a manager! #JusticeForYasmineJames

How will you handle this @McDonalds? Will you fire the manager who did nothing and continued to engage racist customer Daniel Taylor? Have you reached out to the victim, Yasmine James? Your response will determine if I ever patronize your stores again. #JusticeForYasmineJames pic.twitter.com/bOPYFUeozq

@McDonalds A young female employee is doing her job-is attacked-defends herself & you fire Ms. James? Is the manager still employed? He most certainly did not provide a safe workplace for his employees as he watched the assault. #BoycottMcDonalds #JusticeForYasmineJames #MeToo https://t.co/sM5kFPGSFY

Dear Daniel Taylor,
What was it about her that made you think you could reach out & grab her, without repercussion? I know you've got the headache from hell because she tore your head up!! https://t.co/UPWf1xoQJL