Rescuers dig through rubble for survivors after Indonesian tsunami kills 280 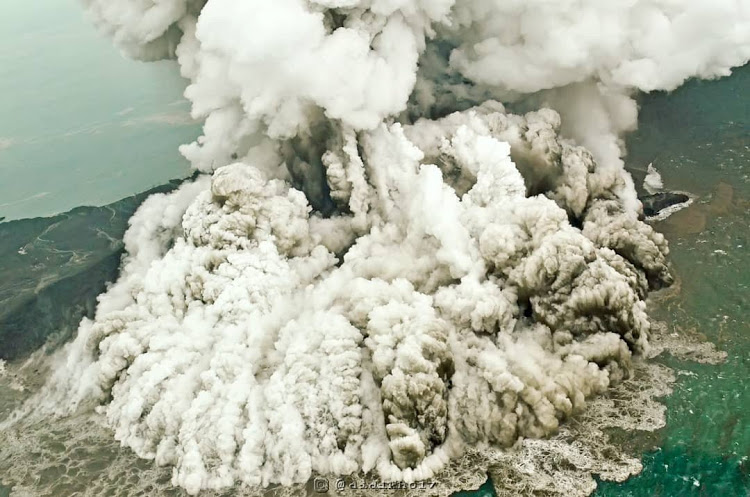 A plume of ash rises as Anak Krakatau erupts in Indonesia, December 23, 2018, in this picture obtained from social media.
Image: Susi Air/via REUTERS

The death toll from a tsunami that hit the Indonesian islands of Java and Sumatra after the Anak Krakatau volcano erupted rose to at least 280 on Monday, officials said, as rescuers using heavy machinery and their bare hands searched for more victims.

Hundreds more were injured when the tsunami struck, almost without warning, along the rim of the Sunda Strait late on Saturday. More than 3,000 coastal residents were forced to evacuate to higher ground, with a high-tide warning in place until Tuesday.

The vast archipelago, which sits on the Pacific "Ring of Fire", has suffered its worst annual death toll from disasters in more than a decade. Earthquakes flattened parts of the tourist island of Lombok in July and August, and a double quake-and-tsunami killed more than 2,000 people on Sulawesi island in September.

Search and rescue officials used their bare hands and some heavy machinery to clear the remains of buildings on Monday. Government and non-government aid trickled in to Pandeglang, the worst-affected area on Java's west coast.

Indonesia's disaster agency had put the death toll at 222 on Sunday, with about 850 injured and 28 people missing, but raised it to 280 early on Monday. A disaster mitigation agency official in Banten province named Jhony told reporters most victims were Indonesian holidaymakers.

Dudi Dwiriadi, a district military commander, said personnel and volunteers had been briefed to sweep at least 100 km (60 miles) of coastline in search of victims.

The timing of the tsunami over the Christmas holiday season evoked memories of the Indian Ocean tsunami triggered by an earthquake on Dec. 26, 2004, which killed 226,000 people in 14 countries, including more than 120,000 in Indonesia.

Some roads remained blocked by debris and traffic, with families streaming out of the area for fear of further tsunamis.

President Joko Widodo, who is running for re-election in April, was scheduled to visit the area later on Monday.

Television images showed when the tsunami hit the beach and residential areas in Pandeglang, dragging with it victims, debris, and large chunks of wood and metal.

Many coastal residents reported not seeing or feeling any warning signs, such as an earthquake, on Saturday night before waves of 2-3 metres (6-10 feet) washed ashore.

Yuni, a resident of Lampung in Sumatra, was watching television at home when she heard the water coming.

"I heard a rumbling sound and I thought it was the wind. After I opened the door, water came in quickly and dragged me out. When I saw outside, the sea was receding. I decided to run and go as the water came again for the second time," she said.

Roman, a resident of the area who operates tours to Anak Krakatau, said by text message the weather had been fine when the waves struck, although residents had become wary of the rumbling volcano.

He said many others had taken refuge in his elevated village of Tahura Carita, which is about 100 metres from the sea. Evacuees were relying on instant noodles, he said.

Heavy equipment was being moved in to help with rescue efforts, as well as water and sanitation equipment. The military said it was deploying troops to distribute aid and blankets, as well as sending in medics.

At least 48 people were reported dead in Lampung in southern Sumatra, he said.

With the exact cause of the disaster still unknown, authorities were wary of the risk of a recurrence. Public works minister Basuki Hadimuljono said emergency operations would be carried out continuously but "would stop at the first sign of possible high tides".

Television footage showed how the tsunami washed away an outdoor stage where Indonesian rock band Seventeen was performing for hundreds of guests at an end-of-year party for state utility company PLN.

At least four band members and support crew were killed, lead singer Riefian "Ifan" Fajarsyah told followers in a tearful Instagram account. The band's drummer was among the missing.

Another 29 PLN employees and relatives were also killed.

Anak Krakatau, roughly halfway between Java and Sumatra, has been spewing ash and lava for months. It erupted again just after 9 p.m. on Saturday and the tsunami struck about 30 minutes later, according to the Meteorology, Climatology and Geophysics Agency (BMKG).

The tsunami was caused by an undersea landslide resulting from volcanic activity on Anak Krakatau and was exacerbated by abnormally high tides because of the full moon, Nugroho said.

Ben van der Pluijm, an earthquake geologist and professor at the University of Michigan, said the tsunami may have been caused by a partial collapse of Anak Krakatau.

"Instability of the slope of an active volcano can create a rock slide that moves a large volume of water, creating local tsunami waves that can be very powerful. This is like suddenly dropping a bag of sand in a tub filled with water," he said.

The eruption of Krakatau, previously known as Krakatoa, in 1883 killed more than 36,000 people in a series of tsunamis.

Anak Krakatau, which means child of Krakatau, is the island that emerged from the area once occupied by Krakatau, which was destroyed in 1883. It first appeared in 1927 and has been growing ever since.