An instrument of love: Why Bush’s faithful dog moved the world

Politicians divide opinion in death as much as in life, and George HW Bush, who died last week, was no exception.

Yet critics and fans alike have united over one thing – a photograph of his service dog, Sully, keeping vigil in front of the former president’s flag-draped coffin.

It’s an image that speaks volumes about the bond between humans and our four-legged friends, especially in times of grief and trauma.

Sully, a specially trained labrador retriever, was inseparable from his master during the last few months of his life, and so it continued in death.

He accompanied the coffin on Air Force One from Texas to Washington on Monday, and made the return journey on Wednesday.

Then he will begin work at the Walter Reed military medical centre in Maryland, helping to provide therapy for physically or mentally damaged soldiers.

Dogs have an amazing capacity to make us feel special – even the simple act of making eye contact with one increases levels of oxytocin, the same hormone that helps mothers bond with newborns and people establish intimacy with each other.

Being with dogs also decreases our levels of the stress hormone cortisol. In winter, when the nights draw in so early, we need all the vitamin D we can get: not just the sunshine-induced vitamin D, but vitamin Doggy, too.

I watched this dog climb gently on to the beds of severely ill youngsters and just snuggle there. I watched those children’s vital signs, their blood pressure and heart rates, come down.

When my sister died 12 years ago and we congregated at my parents’ house, their two border terriers Polly and Fizz became touchstones for anyone who wanted to snuggle on the sofa with their own thoughts and some simple canine companionship.

Now I have two dogs of my own, a pair of rescue greyhounds called Velvet and Dash, whose implacable good nature (and downright laziness) are the perfect antidote to troubled times.

When life gets stressful, which inevitably it does from time to time, nothing helps clear my mind like taking them for a long walk through the woods and fields, feeling their heads nuzzle my hands as we go.

Bush funeral to hark back to 'kinder, gentler' era in U.S. politics

Bush funeral to hark back to 'kinder, gentler' era in U.S. politics
News
2 years ago

Every dog can do this, not just ones like Sully, who have been through two years of specialist training.

Andrew Brown spent three months in an infirmary after a stroke. “The consultant suggested that we bring one of his dogs into the ward to see him,” recalls Andrew’s son, Colin. “Jomo the curly-coated retriever was chosen. He padded through the door and froze on entering what was for him the biggest vet’s surgery he’d ever seen, full of the scents of antiseptic and bleach. He quivered with fear in the lift, a great moving box with strange noises. He shook with terror in the day room as we waited for my father.

“The doors opened. The bed was rolled in. My father’s face was alight with joy. ‘Hello, Joe-Dog!’ Jomo bounded across the day room, leapt straight up on to the bed, stood there on top of Dad, staring at him. And it wasn’t just his tail but his whole body that wagged. Licking and wagging and delighted, Joe-Dog lay down on top of his master and best friend. It was simply the most joyous scene I have ever witnessed.”

For these men and women, who have suffered agonies most civilians can barely begin to understand, a dog is not just a companion: it’s a lifeline.

The novelist Louisa Young concurs, having borrowed her sister’s mutt after her fiancé died.

“It was the kindest thing anyone could do,” she says. “The power of a sweet-natured animal you can just have beside you is incalculable. It was as if the extra volume of the animal – another body, a dumb, kind, furry body containing an innocent soul – was sharing the physical and emotional burden of the grief.

“It seems very simple, but also magical. With people, you have to pay attention to their grief too, and to how much your grief is upsetting them. The dog is outside that hierarchy of grief.”

Florence Nightingale was one of the first people to advocate using dogs to comfort those injured in war, and US Army Corporal Bill Wynne’s Yorkshire terrier Smoky became a national celebrity after providing comfort to soldiers injured World War 2.

Kirsten Dillon, head trainer at the UK charity Veterans With Dogs, knows how dogs can help those suffering from post-traumatic stress disorder (PTSD), such as pulling open drawers to make sure medication can be taken, waking someone suffering from night terrors, and lying next to them.

For these men and women, who have suffered agonies most civilians can barely begin to understand, a dog is not just a companion: it’s a lifeline. 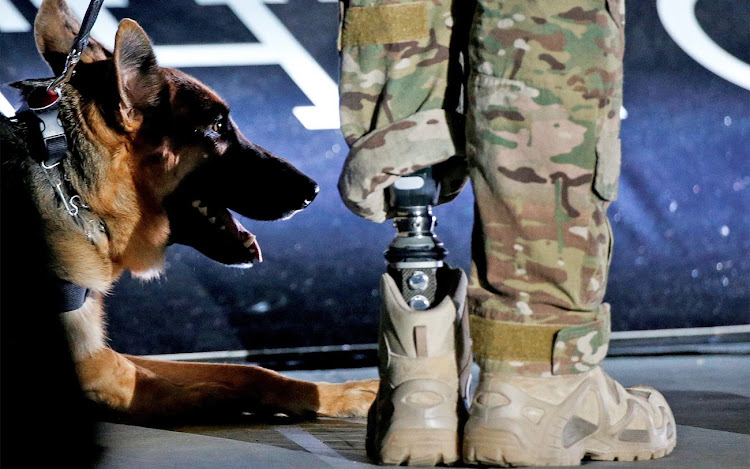 Therapy dogs aren’t confined to the military. Many hospitals use them for the benefit of both patients and staff.

A mother whose six-year-old daughter was in Liverpool’s Alder Hey Children’s Hospital said the children there “would change dramatically when Holly, the golden retriever, came. I watched this dog climb gently on to the beds of severely ill youngsters and just snuggle there. I watched those children’s vital signs, their blood pressure and heart rates, come down. I watched their parents, who are grieving the old lives they had before their child got sick, visibly breathing again. It was amazing.”

Children in particular respond to dogs. The charity Pets As Therapy sends some of its 5,000 dogs into schools every week, where they’re especially sought after by children with difficult home lives, learning or behavioural difficulties or emotional issues.

At one north-west London school, pupils have visibly benefited from their time with Millie the Jack Russell: walking her, petting her, reading to her, and all the time being made to feel special almost without realising it.

The 2012 Sandy Hook school shooting in Connecticut, where 20 children and six adult staff members were killed, was the kind of tragedy that scars the psyche of a nation, let alone those of the immediate survivors.

Tim Hetzner, who led a team of comfort-dog handlers to the school afterwards, found that children would tell the dogs things they’d never told anyone else. One little girl, who hadn’t said a word since the shooting, began to talk after cuddling one of the dogs.

Get the Times Select app or daily email newsletter

“They’re kind of like counsellors with fur,” Hetzner explained. “They have excellent listening skills, and they demonstrate unconditional love. They don’t judge you or talk back. That’s a common mistake people make in crisis situations – feeling obligated to give some sort of answer or advice, when really, those who are hurting just need to express themselves.”

In the end, it comes down to something very simple, something best summed up by Bill Wynne when he described Smoky: “She was just an instrument of love.” Her, and every dog too: Man’s best, most faithful, most undemanding friend.