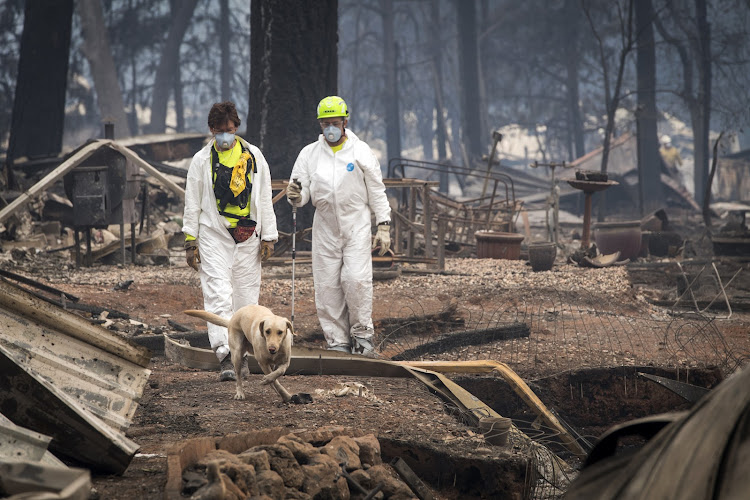 Search and rescue workers walk with a cadaver dog during the Camp Fire in Paradise, on Tuesday, Nov. 13, 2018. The Camp Fire north of Sacramento has now killed at least 42 people, injured three firefighters and destroyed 6,500 homes.
Image: David Paul Morris/Bloomberg via Getty Images

National Guard troops were due to arrive on Wednesday to help search for more victims in the charred, ash-strewn ruins where the northern California town of Paradise stood, before it was erased in the deadliest, most destructive wildfire in state history.

The Guard contingent, about 100 military police trained to look for and identify human remains, will reinforce the coroner-led recovery teams, cadaver dogs and forensic anthropologists already scouring the ghostly landscape of a fire that has killed at least 48 people.

The grim, painstaking search is concentrated in what little is left of Paradise, a Sierra foothills town in Butte County, California, about 280 km north of San Francisco, that was overrun by flames and largely incinerated last Thursday.

The Butte County disaster coincided with a flurry of blazes in Southern California, most notably the Woolsey Fire, which has killed two people, destroyed over 400 structures and displaced about 200,000 people in the mountains and foothills near the Malibu coast west of Los Angeles.

The origins of both the Camp and Woolsey fires were listed as under investigation.

But two utility companies, Southern California Edison and Pacific Gas &Electric, reported to regulators they experienced problems with transmission lines or substations in areas around the time the blazes were reported to have started.

By late Tuesday, with the help of diminished winds and rising humidity levels, fire crews had managed to carve containment lines around more than a third of both fires, easing further the immediate threat to life and property.

After touring some of California’s earlier wildfire zones in August, Zinke blamed “gross mismanagement of forests” because of timber harvest restrictions that he said were supported by “environmental terrorist groups“. While prospects for suppressing the flames grew more hopeful, authorities pressed on with the task of accounting for those listed as missing.

County Sheriff Kory Honea said he requested the Guard troops, along with “disaster mortuary” crew, portable military morgue teams and specialists from a private DNA laboratory to speed the detection and identification of additional remains.

“We want to cover as much ground as we can,” Honea said at a Tuesday evening news conference where he announced that the six latest sets of remains had been recovered in Paradise earlier in the day.

The fatality count of 48 already far exceeds the previous record for the greatest loss of life from a single wildfire in California history — 29 people killed by the Griffith Park fire in Los Angeles in 1933.

Honea said that in some cases victims were burned beyond recognition, or even beyond the use of fingerprint IDs.

Dental records will be needed to positively identify some, but “dental records might not be available if the dentist office burned to the ground“, he said.

“We’re finding remains in various states,” he told reporters. “People have been badly burned. Some of them, I assume, have been consumed.”

He said it was possible that some remains might turn up only once residents with homes still intact are able to return. More than 50,000 remained under evacuation orders.

Honea had previously said 228 people were listed as missing.However, he said on Tuesday night those numbers were highly fluid and that his office planned to publish a new list of missing persons soon and would ask the public to help account for them.

He said it remained unclear how many individuals whose whereabouts were unknown had perished or fallen out of touch in chaotic evacuations.

By late Tuesday, the Camp Fire had blackened 52,600 hectares in all.

The Woolsey fire by comparison has scorched 39,000 hectares of chaparral-covered rolling hills and canyons spanning Ventura and Los Angeles counties, an area roughly the size of Denver.