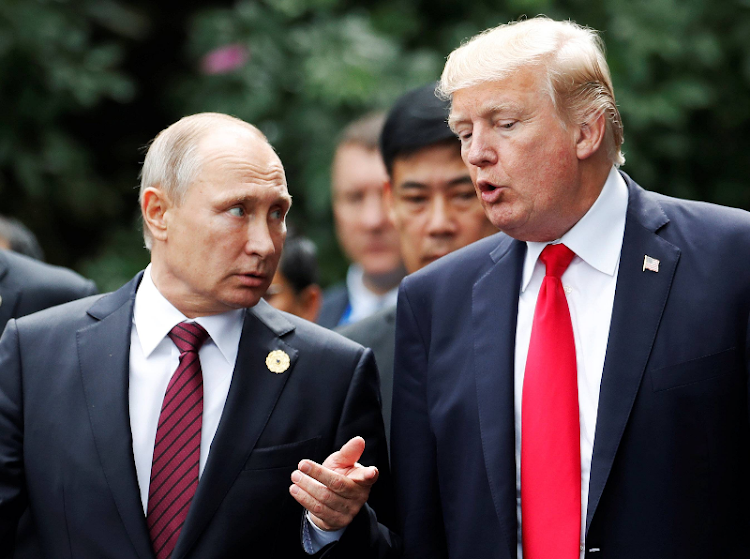 In a telephone conversation with his Iranian counterpart, Hassan Rouhani, Putin and Rouhani agreed that the Western strikes had damaged the chances of achieving a political resolution in the seven-year Syria conflict, according to a Kremlin statement.

"Vladimir Putin, in particular, stressed that if such actions committed in violation of the U.N. Charter continue, then it will inevitably lead to chaos in international relations," the Kremlin statement said.

The U.S. ambassador to the United Nations, Nikki Haley, told CBS' "Face the Nation" program that the United States would announce new economic sanctions on Monday aimed at companies "that were dealing with equipment" related to Syrian President Bashar al-Assad's alleged chemical weapons use.

On Saturday, the United States, France and Britain launched 105 missiles targeting what the Pentagon said were three chemical weapons facilities in Syria in retaliation for a suspected poison gas attack in Douma on April 7.

The Western countries blame Assad for the Douma attack that killed dozens of people. The Syrian government and its ally Russia have denied involvement in any such attack.

The bombings marked the biggest intervention by Western countries against Assad and ally Russia.

French President Emmanuel Macron said on Sunday that he had convinced Trump, who previously said he wanted to take U.S. forces out of Syria, to stay for "the long term."

The United States, France and Britain have said the missile strikes were limited to Syria's chemical weapons capabilities and not aimed at toppling Assad or intervening in the civil war. Macron said in an interview broadcast by BFM TV, RMC radio and Mediapart online news that he had convinced Trump to focus on the chemical weapons sites.

The White House pushed back against Macron's comments about Trump's intentions for U.S. forces.

“The U.S. mission has not changed - the president has been clear that he wants U.S. forces to come home as quickly as possible," White House spokeswoman Sarah Sanders said.

"We are determined to completely crush ISIS and create the conditions that will prevent its return." she said. "In addition we expect our regional allies and partners to take greater responsibility both militarily and financially for securing the region.”

'Hard for us, but will do more damage to the USA'

Responding to Haley's remarks about the plans for new sanctions, Evgeny Serebrennikov, deputy head of the defence committee of Russia's upper house of parliament, said Moscow was ready for the penalties, according to RIA news agency.

"They are hard for us, but will do more damage to the USA and Europe," RIA quoted Serebrennikov as saying.

In Damascus, Syria's deputy foreign minister, Faisal Mekdad, met inspectors from the global chemical weapons watchdog OPCW for about three hours in the presence of Russian officers and a senior Syrian security official.

The inspectors were due to attempt to visit the Douma site. Moscow condemned the Western states for refusing to wait for the OPCW's findings before attacking.

Mekdad declined to comment to reporters waiting outside the hotel where the meeting took place.

Assad told a group of visiting Russian lawmakers that the Western missile strikes were an act of aggression, Russian news agencies reported.

Russian agencies quoted the lawmakers as saying that Assad was in a "good mood", had praised the Soviet-era air defence systems Syria used to repel the Western attacks and had accepted an invitation to visit Russia at an unspecified time.

Trump had said: "Mission accomplished" on Twitter after the strikes, although U.S. Lieutenant General Kenneth McKenzie at the Pentagon acknowledged elements of the program remained and he could not guarantee that Syria would be unable to conduct a chemical attack in the future.

Russian and Iranian military help over the past three years has allowed Assad to crush the rebel threat to topple him.

Although Israel has at times urged stronger U.S. involvement against Assad and his Iranian and Lebanese Hezbollah reinforcements in Syria, it voiced backing for Saturday's air strikes by Western powers.

The leader of Lebanon's Hezbollah said on Sunday that Western strikes on Syria had failed to achieve anything, including terrorizing the army, helping insurgents or serving the interests of Israel.

Sayyed Hassan Nasrallah said the U.S. military had kept its strikes limited because it knew a wider attack would spark retaliation from Damascus and its allies and inflame the region.

"The American (military) knows well that going towards a wide confrontation and a big operation against the regime and the army and the allied forces in Syria could not end, and any such confrontation would inflame the entire region," Nasrallah said.

The heavily armed, Iranian-backed Shi'ite Hezbollah movement, which fights alongside the Syrian army and is represented in the Beirut government, has been a vital ally of Damascus in Syria's war.

France, the United States and Britain circulated a draft resolution to the U.N. Security Council late on Saturday that aims to establish an independent inquiry into who is responsible for chemical weapons attacks in Syria. The mechanism would look at cases where the OPCW fact-finding mission has established chemical weapons were used or likely used.

Diplomats said negotiations on the draft resolution would begin on Monday and it was not immediately clear when the United States, France and Britain wanted to put it to a vote.